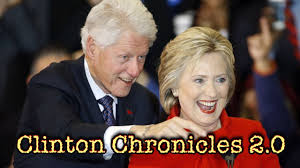 Only the government can relate nonsense with a straight face. Here is the back story.

When President Donald Trump fired FBI Director Jim Comey last spring, the attorney general's stated purpose for recommending the firing was Comey's dropping the ball in the investigation of Clinton's email when she was secretary of state. After a year of investigating her use of her own computer servers to transmit and store classified materials instead of using a government server to do so — and notwithstanding a mountain of evidence of her grossly negligent exposure of secret and top-secret materials, which constitutes the crime of espionage — the FBI director decided that because no reasonable prosecutor would take the case, it should be dropped. Weeks later, the DOJ ratified Comey's decision.

At the same time that Clinton was failing to safeguard state secrets, she was granting official State Department favors to donors to her family's charitable foundation. There are dozens of examples of this so-called "pay to play," the most egregious of which is the Uranium One case. This involved a Canadian businessman and friend of former President Bill Clinton's, Frank Giustra, who bundled donations from various sources that totaled $148 million, all of which Giustra gave to the Clinton Foundation.

At the same time that Giustra made this extraordinary donation, he was representing a client that needed federal permission to purchase a 51 percent stake in Uranium One, which then controlled about 20 percent of America's licensed uranium mining capacity. Secretary Clinton freely gave Giustra's client the State Department's approval, and it soon acquired the remaining approvals to make the purchase. Giustra's client is a Russian corporation controlled by the Kremlin.

When the FBI got wind of the Giustra donation and Secretary Clinton's approval and the Kremlin involvement, it commenced an investigation of whether Clinton had been bribed. At some point during former President Barack Obama's second term, that investigation was terminated. We do not know whether the investigating FBI agents learned that the Clinton Foundation was not even registered as a charity by the states in which it was doing business or authorized by them to receive tax-free donations.

At the same time that the FBI was looking into Uranium One, American and British intelligence agents were surveilling Donald Trump. The belated stated purpose of that surveillance was to ascertain whether the future president or his colleagues were engaged in any unlawful activity by accepting campaign favors from foreign nationals or were improperly assisting foreign intelligence agents to interfere with the presidential election.

One of the foreign nationals whose communications were captured during that surveillance was Sergey Kislyak, then the Russian ambassador to the United States. He spoke with Michael Flynn, then the national security adviser to President-elect Trump. Mysteriously, portions of a transcript of those intercepted communications were published in The Washington Post.

Another foreign national who caught the FBI's attention is a former British intelligence agent named Christopher Steele. Steele had compiled a dossier about, among other things, alleged inappropriate behavior by Trump in a Moscow hotel room years earlier. After offering Steele $50,000 to corroborate his dossier, the FBI backed down.