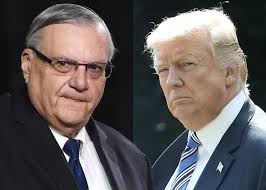 Trump's Arpaio pardon raises several questions. The most important ones for once have easy answers, and have been covered elsewhere.

Was Arpaio guilty? Of course he was. He not only admitted to willfully violating court orders, he openly bragged about it, including to the press.

Should the law he broke have been a law at all? Yep. He continued to detain people for whom no charges could be filed, and broke the fourth amendment repeatedly by searching without probable cause.

Did Trump have the power to pardon him? Yes, and the Presidential power of the pardon isn't limited by much. It has to relate to offenses against the United States, they can't directly affect an impeachment process, and they can't be given before the crime is committed. None of these apply to Arpaio.

Should he have been pardoned?

Presidential pardons are often done in reality for a string of bad reasons. But they are generally crouched in one of two excuses, or for two arguably good reasons.

One, it's done if the underlying public policy criminalizing the action is misguided or the sentence was significantly harsh… think non-violent drug offenses and minimum sentencing guidelines that didn't take individual considerations into account. But, of course, Arpaio was violating the fourth amendment and conducting false imprisonment of those he would or could not charge, and he hadn't even been sentenced yet.

Two, it's done to grant mercy. In this case, it's generally done after some time has been served, after those to be pardoned have expressed remorse for their crimes, and after their character has been shown to be commendable. Arpaio has served no time, received no punishment, expresses no such remorse, and his character is quite clear from decades of words and deeds.

His past conduct and actions prior to what he was charged with shouldn't matter from a legal sense, and would be inadmissible in court. However, pardons are about as much a matter of law in the judicial sense as impeachment proceedings–in that they are governed more by politics than blind application of standard rules. His character matters, and shows what type of person Trump feels deserving of a pardon.