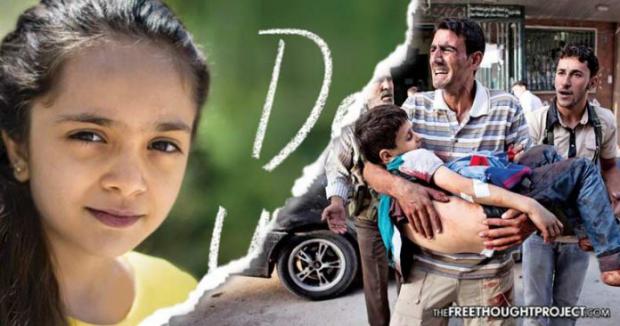 Shameless aptly describes the dirty dealings of modern war, from drone bombing human targets from afar in denial of all due process and invasions into sovereign lands, to pro-armed aggression propaganda — often brazen fabrications disseminated across media to engender support for otherwise untenable conflict — including that exploiting young children, who could not possibly possess the critical thinking necessary to grasp the messages their words send to the world.

And no better example of this puppetry of children for war profiteering and Western imperialist agenda-pushing exists than in the case of seven-year-old Bana al-Abed — proffered as the voice of innocent victims of the Syrian government's bombardment of Aleppo — whose Twitter following just surpassed 386,000, after she featured in a corporate media-touted video promoting the United States' goal of deposing Bashar al-Assad.

A child was chosen by propagandists for a reason.

September 2016 marked the creation of the Bana al-Abed Twitter account, which exploded in popularity by tweeting express "calls early on for action against the Syrian president, and Russia, and with a glaring absence of information or mention of the terrorist factions occupying eastern areas of Aleppo," as independent journalist, Eva Bartlett, points out.

How Much Longer Must We Suffer The Liberal Media's "Fake Pandemic?"

Ep. 1313 Why is the Media Hiding This Bombshell?

The MSM Is Using Left-Right Divide To Conquer Us All!