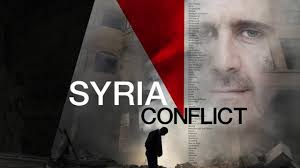 It appears that Trump is preparing a big aerial attack on Syria in conjunction with the forces of other states like Great Britain, France and Israel. Ground forces may follow. The reason is that Assad is rapidly closing in on total victory in Syria. That is the only reason. All talk about chemical weapons and suspected chemical attacks coming from the White House is lying.

I can't predict whether this will happen much less the details. I can't predict what Russia, Iran and Syria might do to stop it or do afterward, if it happens. What I can do is say what I think such an attack means.

It's straight out aggression. This means that the U.S. loses any semblance of moral leadership of this world. It means the victory of brute force in this country. It means the end of Washington's credibility for some time to come. It means the end of the rule of law here at home. That has widespread ramifications. The glue that holds the society together dissolves. The country as an exponent of its long-held values goes down the toilet.

It means the end of the empire. The leadership of the world will pass to other nations. But the residual power lodged in Washington is so great that a dangerous period occurs.

The Russians will be forced into much greater armaments to defend against the U.S., which will be seen as a naked aggressor. The weapons it builds and readies will seriously be pointed at America as offensive possibilities. America will become a far less safe place to live in. The whole world will be much less safe.

Iran will be forced into more armaments. It may attack based on what it now has. It may even scrap the nuclear agreement and start a rush program to get nuclear weapons. It will certainly increase its military capabilities.

The U.S. attack will be comparable to Germany's attack on Poland in 1939. The U.S. will be treated with the same contempt with which Germany was treated on its attack.

The Middle East will be thrown into great confusion. It will create an environment conducive to both more terrorism and more state-led force.

The American public will feel shame and anguish. A movement to impeach Trump will erupt. Street disturbances will lead to federal guns being pointed at and used against Americans. Increased arrests and detention will follow. Aggression toward Syria will inevitably lead to federal government aggression against Americans at home. Civil rights will take a big hit. So may free speech. Freedom will be curtailed. The economy will sink, causing no end of budget problems. They'll be met by cutbacks. The dollar will sink.

Some parts of government and the military begin to rebel against other parts. Confusion reigns.

The current chemical weapons false flag is comparable to the burning of the Reichstag. When America starts to boil as a consequence of the aggression, Trump will exercise the state of emergency powers option already in place. That will lead to attempts on his life and other high officials of the U.S. government, if they do not begin even sooner.