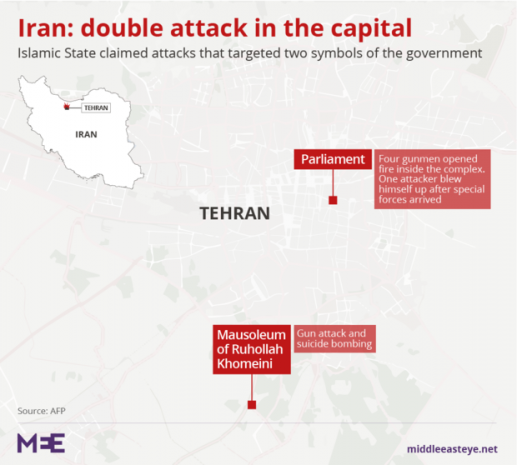 Iran's Revolutionary Guard Corp (IRGC) pointed the finger at Saudi Arabia for twin attacks on Iran's parliament and the Mausoleum of Ayatollah Khomeini on Wednesday morning which left 12 people dead.

The attacks, which took place a few kilometres south of the capital, were the first in the country to be claimed by the Islamic State group.

"This terrorist attack happened only a week after the meeting between the US president (Donald Trump) and the (Saudi) backward leaders who support terrorists," said the IRGC in a statement, published by Iranian media.

"The fact that Islamic State has claimed responsibility proves that they were involved in the brutal attack."

A security guard was killed when four gunmen burst into Tehran's parliament complex, while a gardener was reported dead when several armed assailants entered the grounds of Khomeini's mausoleum in the south of the city, according to the ISNA news agency.