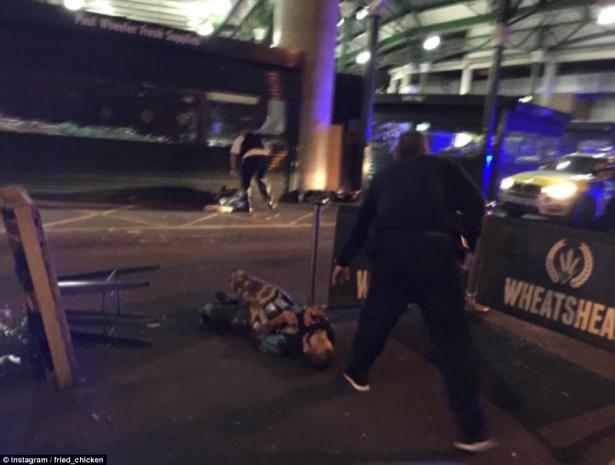 Police are today seeking the identities of three Jihadi terrorists who were shot dead by armed police after killing seven people and injuring dozens of others in a horrific van and knife rampage through central London last night.

The men, described as being 'of Mediterranean origin', mowed down up to 20 revellers as they careered across London Bridge in an 'S shape' at 50mph before they began 'randomly stabbing' people in nearby Borough Market.

Today five people were reportedly arrested in an early morning raid on a block of flats in Barking, east London, as police launch a major investigation into what is the third terror attack on British soil in the last three months.

Speaking outside No 10 today, Theresa May confirmed the London Bridge atrocity is not directly connected to last month's Manchester bombing or Westminster attack in April but that all three are linked by 'the single evil ideology of Islamist extremism'. The terror threat level remains at 'severe', meaning another attack is 'highly likely'.

The three attackers, who were wearing fake suicide vests, shouted 'this is for Allah' as they used 12-inch hunting knives to attack revellers at busy bars and restaurants in the market, sending dozens of others fleeing for their lives. One of the suspects was wearing an Arsenal football shirt.