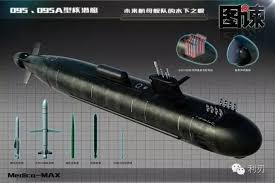 Perhaps it is time to shift attention away from the "rally around the flag" diversion that is North Korea and pay some attention to China, which delighted by the ongoing geopolitical distractions is currently building the world's largest submarine facility, which will be able to produce as many as four ultramodern nuclear submarines at a time.

Starting later this year, China's new submarine factory on the Yellow Sea will churn out nuclear-powered attack submarines (or SSNs) ensuring that the sub program of the People's Liberation Army Navy (PLAN) will soon be a deadly global force. Once fully operational, the assembly line will enable China to at least match USN SSN production.

Bohai Shipbuilding Heavy Industrial Corporation (BSHIC) is putting the finishing touches on its new facility, which as profiled by Popsci, will start production this year. BSHIC, based in Huludao, Liaoning Province, is China's only builder of nuclear submarines. It previously built the Type 091, 093 nuclear attack submarines (SSN) and Type 092 and 094 nuclear ballistic missile submarine (SSBN).