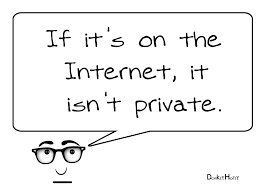 Privacy advocates were aghast when President Trump signed a bill on April 3 that overturned restrictions on data sharing by internet service providers (ISPs).

But to paraphrase Shakespeare, methinks they protest too much. The fact is, unless you take precautions, you already have exactly zero privacy online. Your online data is there for the taking by the likes of Google, Facebook… and the NSA (National Security Agency). And thanks to the new law, by ISPs such as Verizon and AT&T as well.

The rules Congress overturned were passed by the Federal Communications Commission (FCC) last fall. They would have required ISPs to obtain explicit consent from consumers to share sensitive data, such as financial or health information or browsing history. But the rules applied only to ISPs. They didn't cover massive data collectors and aggregators like Google or Facebook. Or for that matter, the NSA.

That's one reason I think the self-appointed privacy advocates are overreacting. And if enacted, the proposed rules would have given consumers a completely false sense of security.

Let's start with the NSA. For at least the last decade, the world's largest intelligence agency has been vacuuming enormous quantities of data from cyberspace. Your email records, browsing history, and just about everything else you do online is fair game. The quantity of data the NSA has accumulated is so massive that it has been forced to construct enormous data centers to store it in. The first one – in Utah – is a million square feet in size.

Perhaps you're not concerned – or are even reassured – that the NSA is keeping a close watch over cyberspace to monitor terrorists and other malfeasants. But even if you're in this category, there are legitimate reasons to protect your privacy online.

Hackers are the biggest threat. As I noted in this post, hackers have developed increasingly sophisticated tools to steal money from your financial accounts. But it's much more common for a hacker to monitor a Wi-Fi access point and steal your login credentials to gain access.

If hackers steal money out of your US account, in most cases, you're not liable for the loss. But that protection applies only to personal accounts. Business accounts, which often have much higher account balances, have much weaker legal protection.

But maybe you don't worry about hackers either. Even then, though, you should be concerned about what Google, Facebook, and other companies do with your online data.

Let's say you visit the doctor one day. He discovers something suspicious and takes a biopsy. A few days later, he tells you that you've been diagnosed with cancer.

Naturally, you're horrified by the news. You decide to take matters into your own hands and conduct some online research into cancer. But once you press the ENTER key on Google or a similar search engine, you'll be far from the only one who knows what you're searching for.

God's Eye View of the Internet, and Q&A

What a Top Secret Cloud Means for Microsof

The 5 Best Free VPNs for Android

How Many Websites Are There?