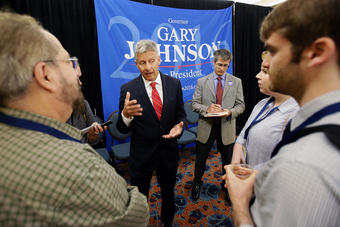 "Would you have any litmus tests for a Supreme Court justice on cases like Kelo, for example, cases that really matter to libertarians, libertarian principles?" Benson asked.

"Yeah I think Kelo is one that really does stand out," Johnson responded. "Although we don't have litmus tests, but Kelo really stands out as a litmus test, in my opinion."

In the same interview, Johnson also repudiated his vice-presidential nominee's earlier remarks suggesting that the two might appoint justices like Stephen Breyer (who was in the majority in Kelo).

It is unfortunate that Johnson's statement isn't entirely clear (he cannot literally both abjure litmus tests, and simultaneously use Kelo "as a litmus test"). But I suspect he means to say that potential nominees positions on Kelo and related issues will be an important criterion for evaluating them, even if it won't necessarily be completely dispositive by itself.

Kelo is the notorious 2005 decision in which a narrow 5-4 Supreme Court majority ruled that it is permissible for the government to take homes and other property from private individuals, and give it to other private parties in order to promote "economic development." Although the Fifth Amendment states that the government may only take property for a "public use," the Court ruled that virtually any potential benefit to public qualifies as such, and that the government does not even have to prove that the supposed benefits will ever actually materialize. In the Kelo case, it didn't. The site once occupied by fifteen residential properties is today used only by a colony of feral cats. One of the feral cats that have taken up residence on the land condemned in the Kelo case. (Photo by Jackson Kuhl).

No potential nominee should be judged solely on the basis of a single case. But Johnson is right to emphasize Kelo as an important yardstick – and not just because I happen to have written a book arguing that the Supreme Court made a major mistake in that ruling.

The issue addressed in Kelo is a important one. As a result of Kelo and similar earlier precedents dating back to the 1950s, hundreds of thousands of people have been forcibly displaced from their homes and businesses, most of them poor, politically weak, and racial and ethnic minorities. The Kelo decision is also replete with errors, and unsound from the standpoint of both originalism and leading versions of living constitutionalism.

Potential nominees' attitudes towards Kelo are also significant for reasons that go beyond the specific issues addressed in the case itself. As a matter of legal logic, the definition of "public use" is distinct from most other issues in constitutional law. But, in practice, judicial nominees who support Kelo are unlikely to give more than minimal protection to other constitutional property rights. Among elite jurists and legal scholars (the kinds of people with a realistic chance of being appointed to the Court), most defenders of Kelo come from the ranks of those who believe that courts should systematically defer to the government in all or most cases involving property rights and other "economic" matters. Some also extend that deferential attitude to a variety of other constitutional rights, as well.

Kelo is also a significant case for those who want originalist judges. With few exceptions, prominent originalist judges and legal scholars tend to be opposed to Kelo. Kelo critics are by no means uniformly originalist. But originalists are overwhelmingly critical of Kelo. As discussed more fully in my book, a wide range of evidence shows that the original meaning of "public use" was restricted to condemnation of property for public infrastructure projects, common carriers and public utilities. It does not permit transfers to private business interests merely on the grounds that they might benefit the local economy in some way. Johnson previously said that he wants to appoint justices who will follow the "original intent" of the Constitution. His statement about Kelo is evidence that he means it.

Johnson's position Kelo stands in sharp contrast to that of GOP nominee Donald Trump, who is a longtime defender of the ruling, and also a beneficiary of abusive takings, including one where he lobbied a New Jersey state agency to use eminent domain to take an elderly widow's house in Atlantic City so he could build a casino parking lot on the site. Trump says he agrees with Kelo "100%" and has offered a variety of ludicrous arguments claiming that economic development takings are actually beneficial. Even socialist Bernie Sanders has a far better position on Kelo than Trump.