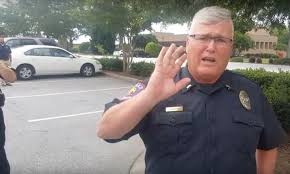 You have the right to film police activity — no matter what that might be — as long as you do not interfere. Occasionally, it becomes necessary to perform a simple audit of police to ensure they will uphold the laws they're tasked with enforcing.

That had been the intent of YouTube user, Trey Citizen, when he filmed the parking lot of the Greer, South Carolina, Police Department — and what he discovered should leave First Amendment advocates everywhere disheartened and wanting to test their local police.

Trey positioned himself at the sidewalk as he filmed the lot for his First Amendment audit. Shortly into the footage, an unmarked vehicle with heavily-tinted windows leaves the lot, pausing as it exits.

Soon afterward, a marked vehicle stops and an officer approaches, and in a seemingly friendly manner, asks Trey, "How are you doing today?"

As everyone should in any interaction with the cops, Trey asks for the officer's name and badge number. Corporal Travis tells the auditor there has been a report of suspicious activity — specifically, the filming of the parking lot — and asks what he's doing.

Trey refuses to offer any additional information, as is his constitutional right since filming the lot is not criminal activity.

Travis, apparently salty at the refusal to provide an explanation, says, "So, we're just gonna have a stare-off … 'cause I'm recording you and you're recording me? Is that what we're going to do?

Trey is under no obligation to provide identification — he isn't doing anything criminal, and if the totality of his 'suspicious activity' comprises filming, Travis should, by all accounts, allow him to continue.

"Have I done anything wrong?" Trey asks.

Of course, Trey's knowledge of the law in this matter stands. With the court's decision in Terry v. Ohio, an officer must have reasonable suspicion a person is committing or about to commit a crime, or must reasonably believe the person "may be armed and presently dangerous." But Travis persists, responding, "There's already been a call on it, so yeah there would."

Trey proceeds with testing Travis, "So, suspicious activity — is that a felony or a misdemeanor?"

"I can't believe you just sat here and lied."

Travis repeats his request for ID, and Trey, obviously more knowledgeable of the law than this law enforcement officer — suspicious activity is neither a felony nor a misdemeanor — asks for a supervisor to be summoned to the scene.