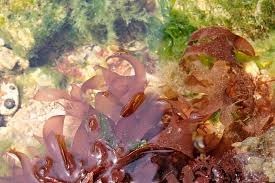 Researchers with Oregon State University recently announced that they have developed a new strain of seaweed that tastes like bacon when it is cooked. The seaweed is a strain of red marine algae called dulse, it is reportedly packed with protein and may be even more healthy for you than kale.

Dulse actually grows in the wild, and is found along the coastlines of both the Pacific and Atlantic oceans, but researchers at Oregon State's Hatfield Marine Science Center have figured out how to cultivate it in a lab so it has this new distinct taste.

"The original goal was to create a super-food for abalone, because high-quality abalone is treasured, especially in Asia. We were able to grow dulse-fed abalone at rates that exceeded those previously reported in the literature. There always has been an interest in growing dulse for human consumption, but we originally focused on using dulse as a food for abalone," researcher Chris Langdon said in a recent statement.

"In Europe, they add the powder to smoothies, or add flakes onto food. There hasn't been a lot of interest in using it in a fresh form. But this stuff is pretty amazing. When you fry it, which I have done, it tastes like bacon, not seaweed. And it's a pretty strong bacon flavor," he added.

This equation will change how you see the world