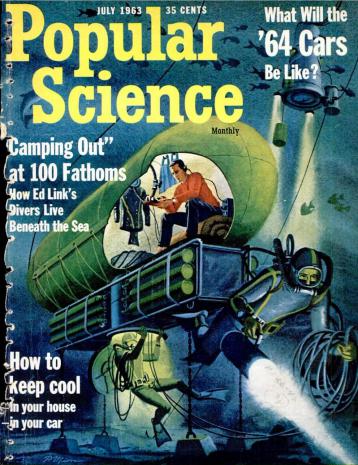 In the July 1963 issue of Popular Science, we detailed the work of Jacques Cousteau, an oceanographer who was building the Conshelf II -- an underwater habitat where he would set a world record living under the sea for 30 days. At the time,Cousteau predicted that "within 50 years a new breed of humans—Homo aquaticus, the Water Man—will live under water without an air supply."

Although artificial gills never made it out to sea, Cousteau's dream of living underwater is not dead. Recently, at a summit in New York City, Fabien Cousteau (grandson of Jacques) announced his intentions to build a city under the sea. "I'm here to help pioneer the next underwater cities, which will be completely self-sustaining, to tend a network of information and data gathering."

In the 1960s, scientists built loads of underwater research labs. Those labs are almost all defunct now. While there's some talk of building new underwater hotels, such as the Poseidon Undersea Resort in Fiji, those projects always seem to be just a few years from completion. Cousteau's vision could turn out to be just another pipe dream, but he says we have the technology to make it work. All that's needed is the funding.