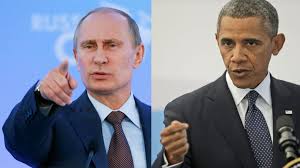 The American president reportedly refused to dine with Putin, who was being hosted by France's president Francois Hollande as part of the D-Day commemoration.

So Hollande, who is on a diet after being called a "little fat man" by former president Nicholas Sarkozy, was forced to host two back-to-back dinners, the first for Obama and the second, delicately described in French as a "souper," or smaller supper, for Vlad Putin, who is not anyway a big eater or drinker.

How remarkably childish and silly all this was. Obama and America's European allies are cold-shouldering Putin for re-absorbing Crimea into Russia, to which it had belonged for 300 years, and for stirring the pot in eastern Ukraine. Meanwhile, US military forces are in action or based in Afghanistan, Pakistan, Djibouti, the Philippines, Yemen, Somalia, Uganda, Central African Republic, Colombia,  Kenya, Europe, South Korea, Japan – in fact, around the globe.