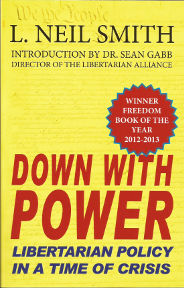 In his 1992 film Freejack, which is concerned, in part, with an unusual kind of virtual reality, Anthony Hopkins, whose reality it is, invites the protagonists to explore it with the words, "Welcome to my mind". In a way, that's the invitation that I'm offering here, except that, unlike my novels, there is considerably more than one mind involved.

You may encounter some today who call themselves libertarians, yet reject the positions I lay out in this book. This is an unfortunate result, in part, of the Libertarian Party's maniacal attempt to build a "bigger tent", over the past couple of decades, by the simple, if self-defeatingly stupid, tactic of watering down what libertarians have always believed until they deemed it acceptable to those who are not libertarians. Yet there remains within the movement—as opposed to the party—a core of strong individualists who value principle over expedience, understanding that their way will lead to eventual victory, while in the long run, the other is a recipe for political suicide.

News Link • Adam vs The Man