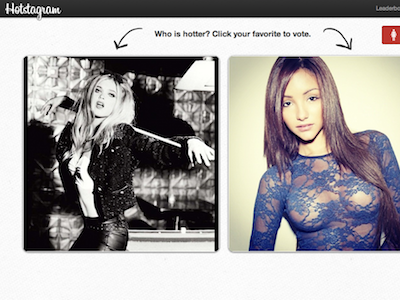 We tracked down Kirk, who declined to give his last name, in the San Francisco offices of Tracks.by, a startup which helps musicians make their tracks go viral. He's 27 and works for a startup—that's all we could get out of him.

Coding Hotstagram, which asks users to rate two photos plucked from Instagram, took Kirk a weekend. Instagram users who'd like to get rated can add the hashtag "#hotstagram" to automatically submit their photos. And Kirk just added a feature which lets people remove their photos in case they'd rather not appear on the site.

Isn't he worried Instagram will shut down the site? Kirk says he's read Instagram's terms and is confident he's in compliance.

Hotstagram, which was teased on Twitter by blogger Ben Parr, appears to be a hit. Kirk says he's seeing 150 ratings a second.

(Hot or Not, by the way, is still alive—and is now run by Badoo, a dating-oriented social network which recently hired high-profile Google executive Ben Ling as COO.)