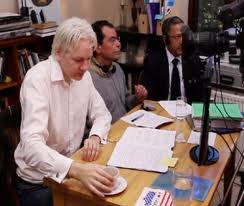 Ready for another surprise from Assange? The second episode of The World Tomorrow has it all. This time Assange has two guests with two opposite points of view ready to lock in a fight over some of the hottest issues.

­In one corner of the ring is Slavoj Zizek, a Slovenian sociologist, philosopher and former anti-communist dissident, who turned communist.

In the other corner stands David Horowitz, a radical right-wing Zionist, who back in the day was a left-wing radical and was involved in fundraising for the Black Panther Party.

The referee, Julian Assange, admitted he had some difficulty bringing the conversation back on track as the guest kept on coming back to the Jewish question.

Despite the heated, the great minds managed to discuss a range of topics, such as the Palestinians and Nazis, the Black Panthers and the Israelis, and the ongoing US presidential race.