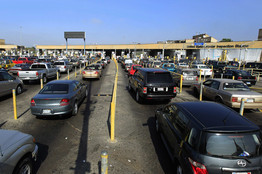 Net migration from Mexico has plummeted to zero thanks to changing demographic and economic conditions on both sides of the border, a new study shows, even as political battles over illegal immigration heat up and the issue heads to the U.S. Supreme Court.

After four decades that brought 12 million Mexican immigrants—more than half of them illegally—to the U.S., the curtain has come down on the biggest immigration wave in modern times.

"The net migration flow from Mexico to the United States has stopped and may have reversed," says the report, which is based on analysis of U.S. and Mexican government data by the nonpartisan Pew Hispanic Center.
The standstill, according to the report, results from declining immigration from Mexico paired with a rising number of people returning south from the U.S. Those trends recently converged, and between 2005 and 2010 about as many Mexicans left the U.S. as flocked here.