PODCAST - Ernest Hancock interviews Angela Keaton (Operations Director at Antiwar.Com) on a variety of issues, including thoughts on the #MeToo movement, libertarians, etc...

1.) The weaponization of the 'newsetters scandal'

a.) define the scandal
b.) how it was ideologically framed
c.) how it was used to divide the movement.
d.) how the factions unintentionally colluded to create a safe place for hatred of Arab,
Palestinians, Muslims and Iranians.

1.) Brink Lindsey and the liberalitarians and open hatred of victims of USG violence
2.) Mises, Raimondo and Trump making way for "the west is best" crowd along with
Cato, IHS, CEI, FEE, until there was movement agreement. e.) Red baiting Ron Paul/ Ukraine

g.) libertarians were horrible on South Africa and Israel. Both of those cloud the judgment

2.) The issue of women in the movement has nothing to do with #MeToo.

a.) I started writing about my experiences after therapy and after I started identifying as a woman
b.) My personal details aren't interesting. They can be found at C4ss and at Thaddeus
Russell's site
c.) My collecting stories
d.) Politico article, no public discussion, one small article by KMW.
e.) There has been no public discussion of the charges against Kokesh, CCRachels, John Fund and
many other men.
f.) The late Tibor Machan as case study
g.) I have nothing but respect for Wendy McElroy but she is too compassionate and PC on the issue
of men. Sharon Presley means well but classical libertarian feminism has no teeth for the rest of
us. I am a pro-trans pro-whore radical feminist. I reject all white feminism and

3.) What is the intersection of the antiwar movement, women's rights and anarchism.

For Alejandro Chafuen, the gathering this spring at the Brick Hotel in Buenos Aires was as much a homecoming as it was a victory lap. Chafuen, a lanky Argentine-American, had spent his adult life working to undermine left-wing social movements and governments in South and Central America, and boost a business-friendly version of libertarianism instead.

It was a lonely battle for decades, but not lately. Chafuen was among friends at the 2017 Latin America Liberty Forum. The international meeting of libertarian activists was sponsored by the Atlas Economic Research Foundation, a leadership-training nonprofit now known simply as the Atlas Network, which Chafuen has led since 1991. At the Brick Hotel, Chafuen was reveling in recent victories; his years of work were starting to pay off, thanks to political and economic circumstances — but also because of the network of activists Chafuen has been working for so long to cultivate.

Over the past 10 years, leftist governments have used "money to buy votes, to redistribute," said Chafuen, seated comfortably in the lobby. But the recent drop in commodity prices, coupled with corruption scandals, has given an opportunity for Atlas Network groups to spring into action. "When there is an opening, you have a crisis, and there is some demand for change, you have people who are trained to push for certain policies," Chafuen noted, paraphrasing the late Milton Friedman. "And in our case, we tend to favor to private solutions to public problems."

Chafuen pointed to numerous Atlas-affiliated leaders now in the spotlight: ministers in the new conservative government in Argentina, senators in Bolivia, and the leaders of the Free Brazil Movement that took down Dilma Rousseff's presidency, where Chafuen's network sprang to life before his very eyes.

"In Brazil, I have been in the street demonstrations, and I'm like, 'Hey, this guy I met when he was 17, 18 — he is up there on the bus leading this. This is crazy!'" Chafuen said, excitedly. Those in Atlas's orbit were no less excited to run into Chafuen in Buenos Aires. Activists from various countries stopped Chafuen intermittently to sing his praises as he walked through the hotel. For many, Chafuen, from his perch at Atlas, has served as a mentor, fiscal sponsor, and guiding beacon for a new political paradigm in their country. 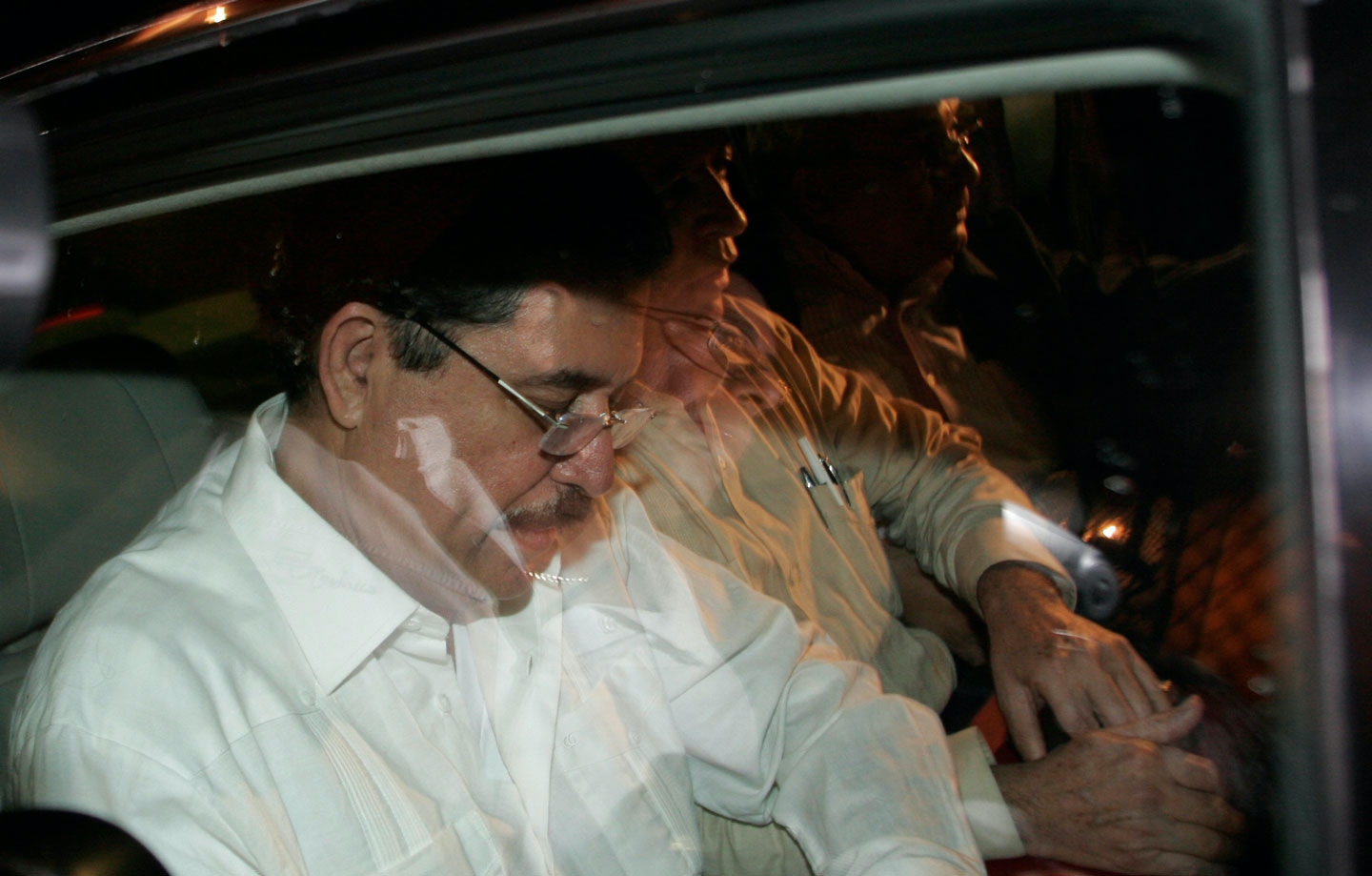 Ousted Honduran President Manuel Zelaya, left, looks down inside a car on the outskirts of San Jose on his way to the airport to board a flight to Nicaragua, June 28, 2009.

A rightward shift is afoot in Latin American politics. Triumphant socialist governments had once swept the region for much of the 21st century – from Argentina's Cristina Fernández de Kirchner to land reform populist Manuel Zelaya in Honduras – championing new programs for the poor, nationalizing businesses, and challenging U.S. dominance in hemispheric affairs.

In recent years, however, leftist leaders have fallen one after another, sometimes in spectacular fashion. Zelaya was led from the presidential palace in his pajamas in a military coup; in Argentina, a real-estate baron swept to the presidency and Kirchner was indicted for corruption; and in Brazil, the ruling Workers' Party, facing a growing corruption scandal and a mass protest movement, was swept out of office via impeachment over charges of budget chicanery.

This shift might appear as part of a larger regional rebalancing, merely economic circumstances taking hold. And yet the Atlas Network seems ever-present, a common thread nudging political developments along.

The story of the Atlas Network and its profound impact on ideology and political power has never been fully told. But business filings and records from three continents, along with interviews with libertarian leaders across the hemisphere, reveal the scope of its influential history. The libertarian network, which has reshaped political power in country after country, has also operated as a quiet extension of U.S. foreign policy, with Atlas-associated think tanks receiving quiet funding from the State Department and the National Endowment for Democracy, a critical arm of American soft power.

A life lesson: Teacher reveals chart she created to explain consent to third graders in the wake of the Kavanaugh hearing - insisting kids 'must be taught explicitly' so they can 'do better'

Liz Kleinrock, 31, is an elementary teacher at Citizens of the World Charter School Silver Lake in Los Angeles, California

The teacher decided to broach the topic in class amid the accusations of sexual assault directed towards Supreme Court nominee Brett Kavanaugh, 53

Her chart defines consent as 'giving permission' and lists situations in which it is needed, from giving hugs to touching another person and sharing secrets

It teaches children how to give or deny consent with words such as 'yes', 'of course', 'no', and 'I don't want that'

A teacher has created a useful, simple chart to explain consent to her third graders, which has warned praise from thousands of social media users.

Liz Kleinrock, 31, is an elementary teacher at Citizens of the World Charter School Silver Lake in Los Angeles, California, where she has taught grades first through fourth.

She decided to broach the topic of consent with her third-grade students amid the accusations of sexual assault directed towards Supreme Court nominee Brett Kavanaugh, 53. 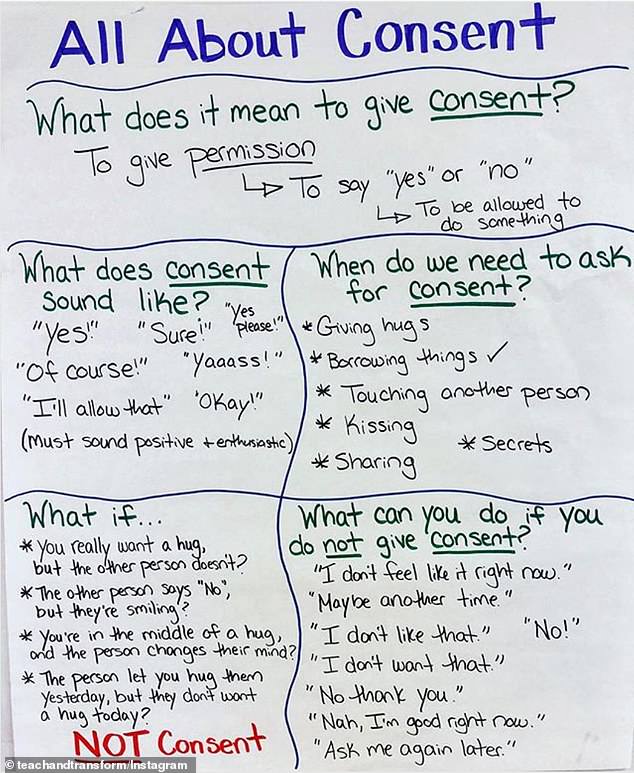 Lesson: Teacher Liz Kleinrock has shared this simple chart she created to explain consent to her third graders amid the accusations of sexual assault directed towards Brett Kavanaugh

Kleinrock's chart, which she shared on her Instagram account last week, is titled 'All about consent' and is designed to teach children when and how to ask for, give, or refuse consent, all in simple words that can be understood by students aged eight or nine.

It begins with the question: 'What does it mean to give consent?', which is answered as: 'To give permission', 'To say "yes" or "no,"' and 'To be allowed to do something.'

From there, the teacher provided examples of what consent sounds like — from 'Yes!' and 'Of course!' to 'I'll allow that' and 'Okay!'

Kleinrock specified that the answer needs to sound 'positive and enthusiastic' in order to constitute actual consent.

Of Amazon we should be afraid, very afraid!