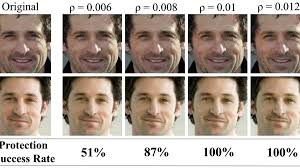 With this cloaking software called Fawkes you can run your photos through it before uploading to your social media etc.

The software makes changes to the image that are indistinguishable to the naked eye but renders facial recognition software unable to recognise the face in the image.

- NEW! We have detected changes in Microsoft's facial recognition model that targets the current release of the Fawkes tool (v0.3). An update to Fawkes is coming shortly. Please download that version instead of 0.3.1. Email us to join our mailing list if you'd like to be notified when the update is ready.

-Fawkes v0.3.1 for Windows
v0.3.1 is an update to the Windows binary to address some compatibility issues introduced from virtualization platforms in the build process. It should provide better compatibility with more versions of Windows.

- Fawkes v0.3 has an updated target selection algorithm that significantly reduces the likelihood of perturbation artifacts after cloaking. This version was released after the NYTimes interview, and eliminates most of the distortions described in the NYTimes article. If you downloaded and experimented with v0.2 or v0.1, we strongly suggest you try v0.3.

News Link • End of World/Mark of The Beast