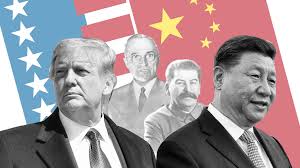 Reportedly, Trump's war on China by other means toughness since taking office will be escalated over the next two months to a more extreme level.

"China's policy towards the US is consistent and clear."

"We are ready to work with the US side to promote the healthy and steady development of China-US relations on the basis of mutual respect, equality and mutual benefit."

"At the same time, China's position is clear on the above-mentioned issues concerning China's core interests."

"We are firmly determined to safeguard our national sovereignty, security and development interests."

Hardline US measures will reportedly include more sanctions on Chinese officials, agencies, and entities, trade restrictions, along with other hostile actions.

According to US National Security Council spokesman, John Ullyot:

"Unless Beijing reverses course and becomes a responsible player on the global stage (sic), future US presidents will find it politically suicidal to reverse (Trump regime) actions."

Likely orchestrated by hostile to world peace and stability Pompeo, perhaps the scheme aims to create an irreversible US war on China by other means, rupturing bilateral relations altogether.

US policies toward China and other independent countries free from its imperial control are built on a foundation of bald-faced Big Lies.

DNI "Ratcliffe will continue playing a leading role, in coordination with other national security principals, in delivering a necessary mindset shift from the Cold War and post-9/11 counterterrorism eras to a focus on great power competition with an adversarial China," said his senior advisor Cliff Sims.

Following anti-China hardline actions last week — banning US private investments in Chinese firms with alleged ties to its military, along with Pompeo saying Taiwan is not "part of China" — much more of the same is likely coming between now and January 20.

If Biden/Harris succeed Trump in January, hardline US policies toward China will surely continue.

According to Renmin University of China's Jin Canrong, perhaps they'll be a short-lived "buffer period" in Sino/US relations, followed by worsening ties, adding:

"We should not put too much expectation on Biden because to contain and confront China is a strategic consensus between the two parties of the US."

"(T)ariffs imposed by Trump are actually a good bargaining chip for Biden to continue negotiations, and he is unlikely to take the initiative to cancel them."

Yet overall policies toward China won't change no matter who serves in US high level positions, he added.

University of International Relations in Beijing's Da Wei believes "Biden's China policy will be built upon the Trump era," adding:

"In fact, a fundamental change in China policy is probably the major political legacy left over from the Trump" regime.

Political Science Professor Sun Taiyi believes Republicans and Dems want to strengthen ties with Taiwan ahead, a policy that will more greatly strain relations with Beijing.

While perhaps to some degree US relations with China may stabilize for a short period of time, they're highly unlikely to improve.

US war on China by other means by both wings of the one-party state is all about wanting to undermine its development as a major political, economic, technological and military power.

That policy will remain unchanged ahead no matter which of its wings controls the White House and/or Congress.