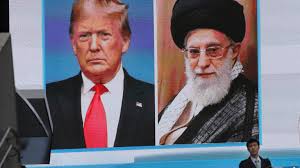 Both right wings of the US war party tolerate no nations unwilling to subordinate their sovereign rights to its interests — even at the expense of their own.

Longstanding US geopolitical policy is all about seeking control over other nations by whatever it takes to achieve its objectives — wars by hot and other means its favored strategy.

Iran is Washington's No. one target in the energy-rich Middle East, seeking control over its world's third and second largest oil and natural gas reserves respectively.

US hostility toward Iran is also about wanting Israel's main regional rival neutralized.

Unilaterally imposed US sanctions on targeted nations are weapons of war by other means.

They have no legal validity. Security Council members alone may lawfully impose them, not individual nations on others.

The US operates exclusively by its own rules, making them up in pursuit of its imperial objectives.

Its war on Iran by other means has been ongoing since its 1979 revolution, ending a generation of US/UK installed fascist tyranny.

It unlawfully targets Tehran's legitimate nuclear program, its legal ballistic missiles development, and right to buy and sell conventional weapons once the UN embargo on this practice ends in October.

In announcing his new EO, Trump falsely claimed that it aims to prevent Iran from "hav(ing) a nuclear weapon" it doesn't seek, never did, and wants eliminated everywhere before these WMDs eliminate us.

Turning truth on its head, he falsely claimed that purchase of conventional weapons by Iran will "endanger the rest of the world (sic)" — what applies to US super-weapons and war on humanity, polar opposite how Iran operates, the region's leading proponent of peace, stability, and cooperative relations with other countries.

State terror worldwide is what the US and its imperial partners do, not Iran.

Sanctions imposed by Trump on the Atomic Energy Organization of Iran, its defense sector, and targeted individuals have no legal validity.

The same goes for all unilaterally imposed sanctions by the US on nations, their entities and officials.

The same is true about US announced JCPOA-related snapback sanctions over the weekend. They're null and void.

Ignoring nuclear armed and dangerous USA and Israel, Trump falsely accused Iran of seeking to "build a nuclear weapon (sic)" — what the world community knows is a bald-faced Big Lie.

Businessman Trump is a geopolitical know-nothing — manipulated by Pompeo and other regime hardliners to pursue their hegemonic agenda, threatening world peace and stability by their actions.

During a Monday press conference on unlawfully imposed Iran snapback sanctions opposed by the world community, Pompeo repeated his usual litany of Big Lies about Iran, along with falsely calling the JCPOA "a abject failure (sic)" — his grammatical error, not mine.

He falsely claimed that the landmark deal "didn't…block Tehran's path to a nuclear weapon (sic)."

Compounding his Big Lie, he falsely claimed that the nuclear deal "gifted (Tehran) billions (sic) and paved the way for (it) to become the arms dealer of choice for terrorist groups and dictators all across the world in just five short years (sic)."

Remarks like the above and similar ones show Pompeo to be an embarrassment to what diplomacy is supposed to be all about — polar opposite the diplomatic stature of Benjamin Franklin, Thomas Jefferson, James Madison, Daniel Webster, Ralph Bunche, and others like them.

Claiming unlawful Trump regime "maximum pressure" on Iran saved "countless" lives was one of a litany of Big Lies by Pompeo in announcing unlawful US sanctions on the country during his Monday press conference.

He turned truth on its head by claiming new US sanctions on Iran serve as "a step toward international peace (sic)" — a notion both wings of the US war party abhor and don't tolerate.

Forever wars by hot and other means define their geopolitical agenda.

The US is an unparalleled global menace, brute force its strategy of choice when other actions fail.

Notably since the neoliberal 90s, each US ruling regime and Congress exceeded the worst excesses of their predecessors.

If Biden/Harris succeed Trump in January, hardline US policies at home and abroad are likely to be more extremist than already — based on the trend over the last 30 years.

Washington's rage to rule the world unchallenged is what the scourge of imperialism is all about — worsened by state-sponsored COVID-19 and economic collapse that caused unprecedented hardships on ordinary Americans and others abroad.

Over the course of its history, notably post-/9/11 and in the current environment, the US transformed itself into a machine for the manufacture of crimes against humanity worldwide.

A democracy in name only, never the real thing, its rage to control planet earth, its resources and populations poses an unparalleled threat to world peace, stability, and ordinary people everywhere yearning to breathe free.