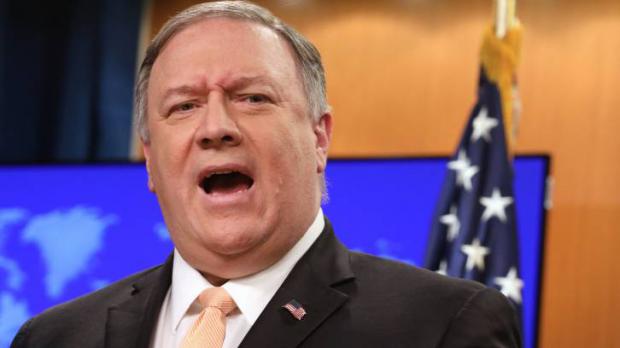 Pompeo is right up there with the most villainous figures in Western history, a thug masquerading as a diplomat.

His pure evil agenda defines him, matching in his capacity how despotic figures operate extrajudicially.

Will he or won't he run for an open Senate seat in Kansas? Reportedly he "bowed out of the race," according to WaPo.

He'd be favored to win if runs, and lots of time to decide, the filing deadline not until June 1.

If elected he'd use the Senate seat as a platform to further his 2024 presidential ambitions. He may do it anyway as secretary of state.

The possibility of him in the nation's highest office should terrify everyone everywhere — a militantly hostile to world peace warmonger, contemptuous of the rule of law and public welfare.

The State Department headlined his Monday address at the right-wing Hoover Institution "The Restoration of Deterrence: The Iranian Example."

He used the Hoover Institution as a platform for demonizing nations on the US target list for regime change — venom featured in all his public remarks.

He falsely blamed Syrian authorities and Yemeni Houthis for devastating US aggression against their countries.

He was silent about millions of Iranians nationwide mourning his passing, justifiably enraged at Pentagon terror-bombing that killed him and Iraqi deputy PMU commander Muhandis — Iraqis sharing their grief and anti-US rage.

He threatened Iran in his address while lying about Soleimani, falsely accusing him of killing hundreds of Americans.

Cold-blooded mass murder is a US, NATO, Israeli specialty, not how the Islamic Republic operates.

Saying "I can assure you that the world is safer as a result of the fact that he no longer" exists defines his rage for aggression and megalomania.

US hostility toward Iran is all about its unwillingness to bow to its imperial demands, its opposition to apartheid Israeli ruthlessness and support for Palestinian rights, along with wanting Iranian hydrocarbon resources handed to Big Oil for looting.

Pompeo lied about an Iranian threat that doesn't exist. He lied claiming the JCPOA "made things worse."

He lied claiming the nuclear deal "put Iran on a clear pathway to" the bomb.

He failed to explain that Trump regime economic terrorism is all about harming ordinary Iranians, wanting them to rise up against ruling authorities they support — ignoring how they blame the US for their misery.

He was silent about undeclared US war on humanity, a gangster state threatening everyone everywhere, responsible for high crimes for centuries — its rage for dominance risking possible nuclear war.

Pompeo saying "(w)e want Iran to behave like a normal country" is code language for demanding it subordinate its sovereign rights to US interests.

Unlawful US sanctions on Iran will remain in place as long as Ziofascists run Washington's geopolitical agenda.

Their notion of "freedom and liberty around the world" is unconditional surrender to unacceptable US demands.

Pompeo's venom was also directed at China and Russia, falsely accusing both countries of hostile actions.

His notion of "security at home and stability…throughout the world" is all about US dominion over planet earth, its resources and populations — achieved by  state terror worldwide.

A "Pro-Life Hero"? Trump Becomes First President To Speak At 'March For Life'

This Week In Stupid*