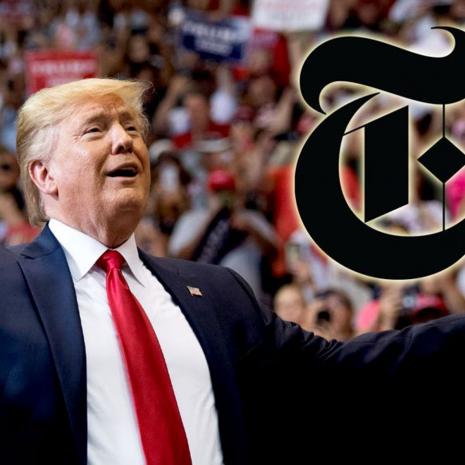 Under international law, murder is a crime against humanity — mass murder by naked aggression the highest of high crimes.

Killing Soleimani was premeditated murder, what the Rome Statute of the International Criminal Court calls a "crime against humanity (when) committed as part of a widespread or systematic attack (on the) population" of any state.

The US waged war on Iran by other means since its 1979 revolution, greatly escalated by Trump region economic terrorism and other hostile actions, including the murder of General Soleimani.

Instead of forthrightly denouncing this high crime, the NYT expressed support by shamefully demonizing an Iranian military commander in the vanguard of combatting US-supported ISIS and likeminded terrorists.

A days earlier Times hit piece falsely called Soleimani a "master of Iran's intrigue (sic)," a figure behind "a Shiite axis of power in the Mideast (sic)," adding:

"He changed the shape of (US aggression in Syria the Times falsely calls) 'civil war' and tightened Iran's grip on Iraq (sic)."

"He was behind hundreds of American deaths in Iraq and waves of militia attacks against Israel (sic)."

He was a "powerful and shadowy 62-year-old (Iranian) spymaster (sic)."

He "was seen as a clandestine force behind an Iranian campaign of international terrorism (sic)."

All of the above is malicious Times rubbish, bald-faced Big Lies about a redoubtable/widely respected freedom fighter.

Soleimani was murdered by the Trump regime to eliminate a figure of his stature, prominence, and resistance against US-supported terrorism.

He was and remains a regional peace and stability champion. The Middle East Eye called him "a Persian paladin or warrior hero to be ranked among" other notable ones in the country's long history, adding:

His "face is on every billboard in Tehran, on every desk, at every hotel entrance."

"He is in civilian clothes and smiles in a way which tells every Iranian that he is religious, moral and incorruptible."

"In death and martyrdom, Soleimani has become the outlet and cypher of the fate and struggle of Iran itself."

More paper hero than real one, the persona behind the image was and remains fake.

Competence didn't earn him four stars. Former peers accused him of brown-nosing his way to the top.

He made himself a brand as much as a general, even presidential material before pillow talk revelations of classified material to his mistress during extramarital sex brought him down.

He's back, featured by establishment media, resurrected to demonize Soleimani, praising his assassination, supporting murder and an act of war on a sovereign state.

Th Times quoted him saying Iranian generals "are the personification of evil (sic). "We calculated they were responsible for at least 600 deaths" of US military personnel (sic)."

The above comments and similar ones are typical rubbish featured by the self-styled newspaper of record and other establishment media.

He was "Iran's terror mastermind (sic)."

He was behind "months of attacks on Americans by Iran's proxy forces in Iraq (sic)."

His "killing was justified (sic)."

It was "legal and strategically sound (sic)."

He was "a monster who specialized in killing Americans (sic)."

"His forces have instigated attacks against our troops in Afghanistan (sic)."

"He plotted a (foiled) bombing in Washington, DC, and attempted attacks on the soil of our European allies (sic)."

He armed…Hezbollah in Lebanon with rockets to pummel the Jewish state of Israel (sic)."

All of the above and more in the hit piece were bald-faced Big Lies — featured by the Times, part of its propaganda war on Iran and other sovereign states on the US target list for regime change.

The Islamic Republic is dedicated to regional peace and stability, polar opposite how the US, NATO and Israel operate.

The Times and other establishment media support their wars of aggression — demonizing Iran for being on the right side of history, opposing Soleimani for being a peace champion.

Further US hostile actions are certain as long as its troops occupy regional countries — why it's crucial to expel them once and for all.