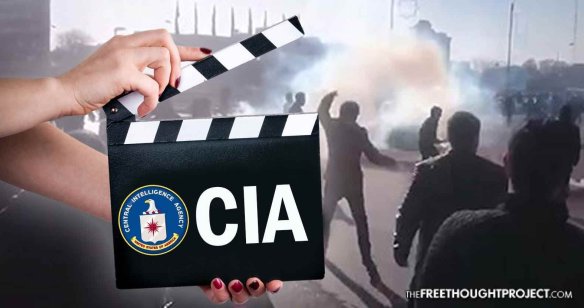 For 40 years since Iranian sovereign independence replaced US-installed fascist tyranny, its leadership and people endured retaliation by economic terrorism and other hostile actions.

The latest US war on Iran by other means came in response to an announced increase in petrol prices.

On Saturday, Iranian judiciary spokesman Gholam-Hossein Esmaili said "(a)round 100 of the senior and junior ringleaders as well as the principal elements behind the recent disturbances have been identified and arrested by the Islamic Revolution Guards Corps (IRGC) at various spots across the country," adding:

"Calm restored to the country under Leader of the Islamic Revolution Ayatollah Seyyed Ali Khamenei's directions, and as a result of the separation of the ranks of the people and the rioters, and the effort expended by the security and law enforcement forces."

Many others involved in rioting remain to be arrested, detained, and held accountable for their actions. Firearms and incendiary materials were uncovered.

Elements involved included anti-Iran Mujahedin-e Khalq (MEK) terrorists and other saboteurs with links to the US and Israel.

Large-scale rallies were held in Tehran and other cities against hooligans involved in rioting and vandalism.

They unsuccessfully sought to "undermine the country's security but we…foiled their plots."

They "wanted to add insecurity to sanctions and limitations but…law enforcement and intelligence…thwarted their long-term comprehensive plots in a few days."

Iran's Expediency Council member Gholamali Haddad Adel accused "foreigners (of) seeking to create the same unrest in Iran that they had established in Iraq and Lebanon."

Days of rioting caused a dozen or more deaths, hundreds injured, and over 1,000 arrested. The vast majority demonstrating against the price increase were peaceful.

Violence and vandalism that began on November 15 was largely quelled days later, calm now restored to the country — though conditions remain unstable because of US economic terrorism and other hostile actions.

According to an unnamed Iranian official, arrested hooligans have links to foreign intelligence agencies.

Some confessed to being paid $60 for each building set ablaze, adding:

Elements "behind the recent riots in the country included Americans, some littoral states of the Persian Gulf, and the Zionists," adding:

"Even Saudis and some Emiratis as well as some other intelligence services contributed to these events to stoke insecurity inside the country."

On Friday, IRGC General Ali Fadavi said "(b)ased on information we have received, the Americans have gone mad that the riots were over within 48 hours and are disappointed that there is no more disorder in Iran," adding:

"Attacking homes, shops, hospitals, banks and gas stations (are) malicious act(s) which (are) not an act of protest nor rioting, but an act of thievery. This is the difference between protest and disorder."

"(T)heir schemes were neutralized. Iran's Judiciary chief Ebrahim Rayeesi said elements "who have abused the concerns and troubles of the people in order to create disorder and insecurity" will be harshly punished.

On Friday, US federal judge Richard Leon awarded $150 million to CIA-connected Jason Rezaian and his family members, another $30 million for so-called personal damages.

In July 2014, Rezaian was arrested, prosecuted, and found guilty of spying, collaborating with regimes hostile to Iran, and spreading anti-Iranian propaganda, part of a Langley plot to destabilize and replace Iranian sovereign independence with US puppet rule.

On January 16, 2016, he was released, the date when the JCPOA became effective, a good will gesture by Iran.

The ruling is the latest US anti-Islamic Republic judicial lynching, funds to be stolen from its illegally frozen assets.