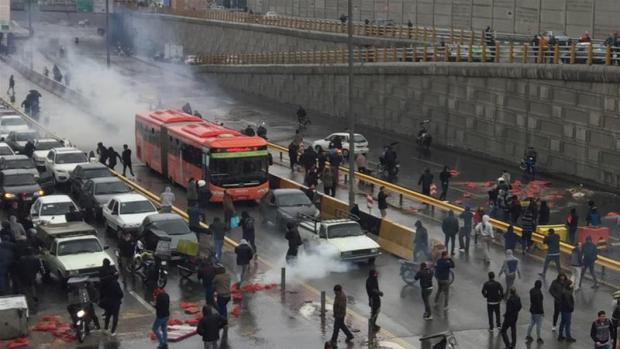 Orchestrated Violence, Vandalism and Chaos by Hooligans in Iran

In response to a rise in petrol prices last week, increasing the cost to 12.7 cents a liter, one of the lowest prices worldwide, violent protests erupted in Tehran and elsewhere in Iran.

The MEK is a State Department designated terrorist organization. According to Hersh, its members were and likely continue to be secretly trained by the US, citing an unnamed former senior US intelligence official.

They "bec(ame) a major instrument in" Bush/Cheney's global war of terror, not on it.

Targeted assassinations of Iranian nuclear scientists were carried out by MEK members — "financed and trained by (Israel's) Mossad," said Hersh.

They conducted sabotage in Iran. "An adviser to the special-operations community told me that the links between the United States and MEK activities inside Iran had been long-standing," Hersh explained, the unnamed advisor adding:

"Everything being done inside Iran now is being done with surrogates." The Trump regime is likely using MEK members to stoke violence and chaos in Iran.

"The main culprits behind the riots in the past two days have been identified, and proper measures are being adopted and the honorable nation will be informed about its result later," adding:

"Certainly, the enemies who have pinned hope on these riots will have no achievements but shame and embarrassment like the past."

Parliamentary official Javad Karimi Qoddousi said "(a) number of rioters linked (to the MEK) have been arrested," others identified.

Commander of Iran's Law Enforcement Police Force Brigadier General Hossein explained that "(o)ur  investigations show that the anti-revolutionary (MEK) terrorists are are behind (ongoing violence), and the security and Law Enforcement bodies will identify these people and will, God willing, punish them in due time."

An IRGC official said scores of "ringleaders" were arrested, adding they confessed to being paid by foreign sources to stoke violence, vandalism and chaos.

"The Iranian people will enjoy a better future (sic) when their government begins to respect basic human rights (sic), abandons its revolutionary posture (sic) and its destabilizing foreign policy in the region (sic), and behaves simply like a normal nation (sic)."

All of the above reflect how the US under both right wings of its war party operates globally, flagrantly violating the rule of law, smashing nations to control them and their resources.

Support by him and other Trump regime officials for the Iranian people is "a shameful lie," adding:

"A regime that hinders the delivery of food and medicine to ordinary people — including the elderly and the patients — through economic terrorism can never claim support for the Iranian people in such a disgraceful way."

It should be held accountable for "declared acts of terrorism and crimes against humanity against the Iranian people."

"Countries that have failed to demonstrate their power and will against US economic terrorism and now provide political and field support for chaos and disruption of public order (in Iran) to hide their inability will bear all the consequences of their dangerous provocations."

On Tuesday, Iranian official Gholamhossein Esmaili said calm was restored in most of the country.

Authorities warned that "decisive" action would be taken against rioters if violence and vandalism continue.

Tehran blamed it on foreign financed saboteurs and hooligans — using a petrol price hike, a minor irritant, as a pretext to rampage against the state.