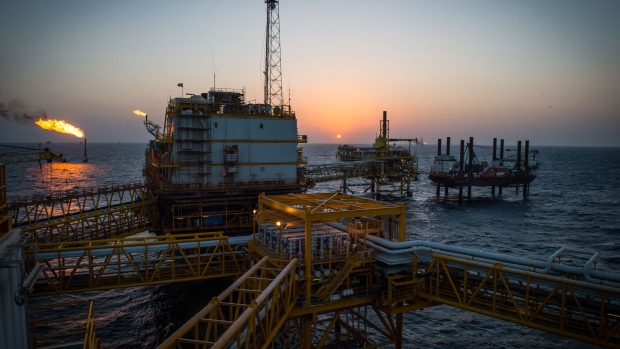 On Sunday, Iranian President Hassan Rouhani said a new oil field was discovered in the country's Khuzestan province, containing over 50 billion barrels of crude. More on this below.

Proved reserves include amounts that are 90% or more recoverable.

Possible reserves include amounts that are at most 50% recoverable.

Other nations with the largest reserves include Russia, Kuwait, the UAE, the US, Libya, Nigeria, Kazakhstan, China, Qatar, and Brazil.

Numerous other countries have significant amounts of proved oil reserves, including Algeria, Angola, Ecuador, Mexico, Azerbaijan, Norway, Oman, and Guyana, among others.

The ability to extract oil sands cost effectively increased the amount of proved reserves from this source, most of it located in Canada.

The US has about three trillion barrels of shale oil, costing about $120 a barrel for extraction and production, more than double the current price of crude.

If technology makes its recovery cost-effective, it would represent the greatest material prize in world history unless other energy sources replace oil one day.

The US Energy Department once estimated Venezuela's heavy and extra-heavy oil reserves at up to 1.36 trillion barrels — a prize Washington long coveted, why Trump regime hardliners are going all out to topple Maduro.

On Sunday, Iran's Rouhani said a newly discovered major oil field "extends from Bostan to the vicinity of Omidiyeh, spanning an area of 2,400 square kilometers with a depth of 80 meters," adding:

"Today we are announcing to the US that we are a rich country and despite your enmity and tyrannical sanctions, the Iranian oil industry's workers and engineers have succeeded (in) discover(ing) this vast oil field."

"(W)e have withstood the pressure exerted by foreigners over the past year, during which our people had to go through difficult times" — because of Trump regime economic terrorism supported by Europe and other nations.

Its maximum pressure failed. Iranian "resilience and unity and their ceaseless efforts have brought us to the point where the United States, in my opinion, has become disappointed."

"There is (weakening support for Trump regime hardliners) on the international stage, except among right wing authoritarian and neo-fascist groups," partnered with Washington's imperial agenda.

Trump and hardliners dictating his geopolitical agenda "are running out of options on Iran. There is not much left to sanction in Iran, and short of military conflict, there is not a lot more pressure that can be applied."

The Islamic Republic had 40 years of experience in dealing with ruthless US policies.

The new discovery added 22 billion barrels to Iranian reserves. Earlier, 31 billion were discovered in the region.

Iran today ranks third worldwide behind Venezuela and Saudi Arabia in proved oil reserves, new deposits likely to be found in the years ahead.

Iranian oil is some of the world's most accessible and easily refined, why it's highly valued by China and other countries.