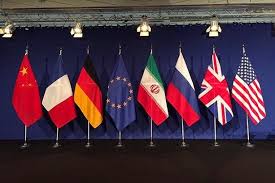 On Tuesday, Iran announced its 4th JCPOA pullback, permitted under the deal's Articles 26 and 36 when other signatories breach their obligations.

Britain, France, Germany, and the EU breached their obligations by failing to fulfill their commitments — operating instead as virtual US colonies, taking orders from Washington, saluting and obeying, even when harming their own self-interest.

Iran remains committed to the JCPOA if Europe changes policy and complies with its obligations, what it hasn't done so far, what's highly unlikely ahead, dooming the JCPOA if things play out this way.

What took years of talks to agree on crumbled because of US and EU betrayal, proving they can never be trusted.

On Wednesday, "(w)e will take the fourth step in reducing commitments to the JCPOA, and I will declare the directives to the Atomic Energy Organization today," adding:

"To all the remaining sides to the JCPOA and other friendly countries, I'd like to state in advance that our new measures will be taken under the supervision of the International Atomic Energy Agency."

"(A)ll measures in the fourth step are reversible just like in the previous steps. That is, the moment the other sides to the agreement begin to live up to their commitments, we will resume our own suspended commitments as well."

"Some countries made efforts to reach positive results before the fourth deadline ran out, but we have no other choice but to take the fourth step starting tomorrow."

"(T)there is time for negotiations for the next two months. If we reached a proper solution for the removal of sanctions on our export of oil and metal, if we could easily use our money in trade transactions, then we would be fully ready to return to the previous conditions (regarding) the level of our JCPOA commitments."

"Reduction of the nuclear commitments, which is a responsibility of the Atomic Energy Organization (of Iran), must continue with full seriousness and in a precise and comprehensive manner, as announced by the administration, until it achieves the appropriate result, and it will definitely yield results."

Iran, Russia and China want the deal saved. The Trump regime and Europe are killing it by their actions. DJT was honest about it.

"We urge Iran to reverse all activities that are inconsistent with its commitments under the JCPOA and to refrain from any further measures that would undermine the preservation and full implementation of the nuclear deal."

She and EU officials failed to address Europe's abandonment of its JCPOA obligations, falsely blaming Iran for their breach of trust and international law.

US-led Western policies are all about do as we say, not as we do — demanding everything of other nations in return for empty promises to be broken at their discretion with impunity.