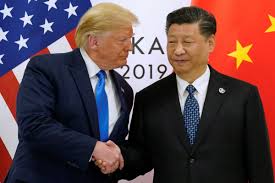 Against the backdrop of blacklisting 28 more Chinese technology-related firms by Trump's Commerce Department, and US tariffs on $250 billion worth Chinese imports set to rise from 25 - 30% on October 15, officials from both countries resumed talks in Washington for the 13th time since mid-2018.

Note: In mid-December, 15% US tariffs are scheduled to be imposed on $160 billion worth of largely Chinese consumer product imports.

No breakthroughs are expected this week like earlier. Talks have nothing to do with trade, everything to do with US aims to undermine Chinese economic, industrial, technological and military development.

It's why reaching accommodation is unattainable, no matter what statements by both countries say.

"Deputy-level trade talks between the US and China aimed at laying the groundwork for high-level (Thursday and Friday) negotiations failed to yield any progress on critical issues, according to two sources with knowledge of the meetings," adding:

"During the discussions on Monday and Tuesday in Washington, the Chinese refused to talk about forced technology transfers, one source said, which is a core US grievance regarding China's economic policies."

"Speaking on condition of anonymity, the person said that talks had also skirted the issue of state subsidies, which the (White House) says give Chinese companies an unfair advantage over international competitors."

"Deputy-level negotiators, led on the Chinese side by vice-minister for finance Liao Min, spent the time focusing on only two areas: agricultural purchases and intellectual property protection."

Another unnamed Chinese source said both sides "made no progress" from earlier in the week talks. Beijing's delegation failed to get US negotiators to freeze tariff increases, a key demand.

China's delegation led by Vice Premier Liu He may leave Washington earlier than expected because of deadlocked talks.

Trump reportedly saying he either wants a "big deal" or none didn't help things. Nothing "big" is remotely possible because of unacceptable White House demands no responsible ruling authorities would accept.

On Tuesday, SCMP reported that Beijing "tone(d) down expectations" ahead of Thursday and Friday talks — China's delegation perhaps to leave on Friday if impasse continues the previous day, what's highly likely.

An unnamed source said "(t)here's not much optimism" for progress ahead of this week's talks because of unresolvable structural issues, cutting to the heart of China's developmental aims it leadership clearly won't compromise no matter how hard the US side pushes.

China intends to retaliate appropriately to increased US blacklisting of its firms and tariff hikes if imposed.

In its latest edition, the Wall Street Journal reported that "US business leaders are worried about the long-term implications of an unending trade war," adding:

"Large companies fear losing access to China, the world's largest consumer market, while small businesses in particular are chafing under 25% US tariffs on many Chinese imports."

Chances are slim to none for any significant progress in talks this week, impasse likely to continue on major issues.