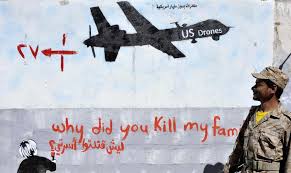 Establishment Broadsheet Contributor Calls for US Accountability in Yemen

Yemen is Washington's war, its second longest in modern times, begun weeks after aggression in Afghanistan — neither country posing a threat to US national security.

The London Guardian is a pro-Western broadsheet, on the wrong side of major issues — most often a lying machine for powerful interests like its US counterpart media.

US academic Mohammad Bazzi is an establishment figure, a Council on Foreign Relations (CFR) senior fellow, a front organization for wealthy and powerful US interests.

He contributes articles and commentaries to establishment media, largely in the US, some abroad like the Guardian and The National in the UAE-dictatorship.

On October 3 in the London Guardian, he headlined: "America is likely complicit in war crimes in Yemen. It's time to hold the US to account."

There's no maybe about US high crimes of war and against humanity in Yemen — and in all its other war theaters.

It's long past time to hold its current and earlier war criminals accountable for Nuremberg-level offenses too grievous and longstanding to ever ignore.

Saying "US officials have done little to stop it," ignored US-orchestrated war, providing the Saudi's with weapons and munitions, selecting targets to be struck, and supplying intelligence, logistical and other support to wage endless war against the shattered country and its people.

Britain and France are also key weapons and munitions suppliers to the Saudi regime. These countries, Israeli, and others are allied with US-orchestrated aggression against Yemen's long-suffering people.

Saying "US officials insisted that American weapons, training and intelligence assistance would help the Saudis avoid causing even more civilian casualties" turned reality on its head.

In all their wars of aggression, the US, its key NATO allies, and Israel consider civilians legitimate targets — flagrantly breaching international law.

Bazzi saying US officials know about deliberate Saudi strikes on civilian targets, but did "little to stop it" ignores longstanding US wars throughout its history since the 18th century — massacring noncombatants with impunity, encouraging the Saudis to operate the same way against Yemenis, aiming to bludgeon them into submission, no matter the human toll.

In early September, a UN report by a "Group of International and Regional Eminent Experts on Yemen" said the following:

Yemenis have been victimized by "a host of possible war crimes committed by various parties to the conflict over the past five years, including through airstrikes, indiscriminate shelling, snipers, landmines, as well as arbitrary killings and detention, torture, sexual and gender-based violence, and the impeding of access to humanitarian aid in the midst of the worst humanitarian crisis in the world."

There's no maybe about what's gone on throughout endless years of war. Indisputable evidence shows the US launched it, the Saudis and other countries involved as junior partners.

Bazzi: "The US is looking the other way while its allies commit war crimes and avoid responsibility for instigating the world's worst humanitarian crisis."

Fact: The US bears most responsibility for war in Yemen and against all other countries it's terror-bombing, along with using ISIS and likeminded terrorists as proxy foot soldiers.

Bazzi: "The Yemen war has created new instability in the wider Middle East, and increased tensions between regional rivals Iran and Saudi Arabia."

Bazzi correctly explained that the Saudis and its regional partners "killed thousands of civilians in airstrikes; intentionally starved Yemenis as a war tactic; and imposed a naval and air blockade on Houthi-controlled areas that has drastically limited deliveries of humanitarian aid."

These are Nuremberg-level high crimes, he failed to stress, the US sharing most guilt for waging war on Yemen long before the Saudis and other regional rogue states got involved.

The US is the architect of aggression in Yemen, not Saudi crown prince MBS, as Bazzi falsely claimed.

Saying UN documented evidence of war crimes in Yemen "should give new momentum to the majority in Congress that wants to end American involvement in a disastrous conflict" ignores reality.

Most congressional members, from both right wings of the US war party, support endless aggression in all nations on Washington's target list for regime change.

Outrage in Washington over smashing one nonbelligerent nation after another threatening no one is absent — now and earlier.

Mask-Wearing: Ineffective, Potentially Hazardous. To Be Mandated in the US?