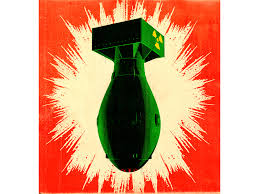 The Myth of an Iranian Threat

Big Lies repeated enough get most people to believe them, especially when echoed by establishment media, operating as press agents for powerful interests.

The hawkish Wall Street Journal is militantly hostile to Iran. It published numerous propaganda pieces on the country, including one on fake intelligence, alleging an Iranian threat, falsely claiming its forces "made plans to target US forces in Iraq and elsewhere in the Middle East…"

No such plans exist, not now or earlier. The US has plans to attack all its adversaries, including Russia, China, Iran and other countries, part of its permanent war on humanity agenda.

"His calling card is always hitting back (sic), usually through terrorist intermediaries (sic). Iran-backed militias could target US troops in Iraq (sic), though we wouldn't discount a direct IRGC raid on US ships or diplomats (sic)," adding:

"Tehran also could organize more assassination or bombing attempts in the West (sic). Mr. Bolton is right (sic) to warn that 'any attack on United States interests or on those of our allies will be met with unrelenting force.' "

"Tehran may think imposing casualties will make Mr. Trump shrink from US commitments." All of the above are bald-faced Big Lies. Responsible editors wouldn't touch the type rubbish Journal editors feature.

So is their false claim about Iranian actions reflecting "malign influence," pushing the myth of its (nonexistent) hostile "regional and nuclear ambitions) — ignoring its peace and stability agenda.

According to Journal editors, "Trump is trying to protect US interests, not start a war." They falsely accused Iran of US aggression in Yemen, together with the Saudis, UAE, Israel, and other imperial allies.

They lied saying Trump withdrew from the JCPOA to deny Tehran "trade and money to finance regional terrorism" — how the US, NATO, Israel, and their imperial partners operate, actions Iran deplores.

Their remarks sound like they were scripted by Pompeo, Bolton and the CIA, Journal editors repeating them to their disgrace.

They lied claiming Iranian involvement in an alleged drone attack on a Saudi oil pipeline, along with sabotage on kingdom and UAE oil tankers — incidents the Islamic Republic had nothing to do with.

"Some social media activists said that American and French aircraft of unspecified type were flying over the port" at the time of the incidents.

If the Trump regime attacks Iran militarily, the Journal and other US media hostile to the country, promoting regime change, will be complicit in the high crime — for their unrelenting propaganda campaign against the country.