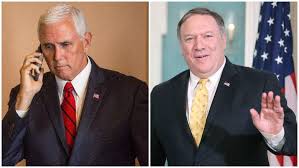 Pence and Pompeo Genuflect to Israel at AIPAC

Annual AIPAC lovefests are deplorable exhibitions of politicians and others stumbling over each other to pay homage to Ziofascist apartheid rule - contemptuous of world peace, the rule of law, democratic values, and fundamental rights of ordinary people everywhere.

Only other hardline extremists could endorse remarks by Pence and Pompeo, both officials cut from the same pure evil cloth, glorifying their triumphs, repeating a litany of Big Lies, AIPAC attendees loving it.

Along with Bolton, Abrams, and their henchmen, contempt for what just societies most cherish isn't expressed more clearly than by these rogue actors - taking victory laps for their high crimes, portraying them as achievements.

Pence: "(It's) the greatest honor of my life to serve as vice president alongside a president who cares so deeply about the state of Israel" - ignoring its ruthlessness, its partnership with US wars of aggression.

Pence: "American support for the security of the state of Israel has never been stronger." Polls show only about one-third of Americans consider Israel a US ally. Support for the Jewish state among young US Jews greatly waned over earlier years.

The scourge of Zionism is increasingly reviled by Americans calling themselves liberals.

An earlier Pew Research Center survey showed only about one-fourth of US Jews aged 18 - 29 believe the Netanyahu regime is "making a sincere effort to bring about a peace settlement with the Palestinians."

Pence (and Pompeo) took victory laps for the Trump regime cutting off aid to Palestinian refugees, for abandoning the JCPOA, for leaving the Human Rights Council and UNESCO, for illegally moving the US embassy to Jerusalem, an international city, not Israel's exclusive capital, for illegally recognizing Syria's Golan as Israeli territory, for illegally imposing sanctions on numerous countries unilaterally, breaching the UN Charter - for waging endless wars of aggression.

Pence perpetuated the myth about the US and Israel wanting regional peace their ruling regimes tolerate nowhere.

He vilified Rep. Ilhan Omar for courageously criticizing Israel, falsely accusing her and other critics of anti-Semitism, calling for her removal from the House Foreign Relations Committee.

He slammed Israeli critics, falsely calling them anti-Semitic, turning truth on its head claiming "(i)t's a cancer metastasizing in the Middle East, in Europe, and indeed, sadly, here in the United States as well."

He left real cancers unaddressed - US/Israeli imperial lawlessness, their contempt for peace, equity and justice, their rage for dominance, their endless wars of aggression.

He lied saying "(a)nti-Zionism denies the very legitimacy of the Israeli state and of the Jewish people."

He lied claiming "Zionism reflects the determination of the Jews to live as a free people in their ancestral homeland. It grows out of the Jewish faith." He lied saying "(a)nti-Zionism is anti-Semitism."

I, a US Jew, non-self-hating, declare my abhorrence of and opposition to virtually everything Zionism represents.

Its scourge harms Jews and non-Jews alike. It's tyranny by another name - extremist, undemocratic, hateful, ruthless, racist, destructive, and hostile to peace, equity and justice.

It's contemptuous of fundamental legal, moral and ethical principles – a monster threatening anyone and anything it opposes, a cancer infesting Israel, America, other Western societies and elsewhere.

Anglo-Zionism is hugely destructive, the Trump and Netanyahu regimes its leading proponents, a cancer threatening world peace and humanity.

Like Pence, Pompeo vilified Iran, the region's leading proponent of peace and stability, its ideology polar opposite US/Israeli war on the world.

They both pretended the Trump region defeated the scourge of ISIS the US created and supports.

The US, NATO, Israel, and their rogue partners represent an unprecedented menace to world peace and humanity's survival - their scourge vital to challenge and defeat.