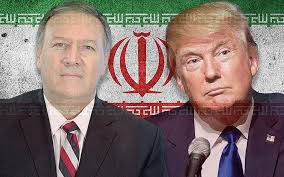 Longstanding US plans call for regime change in Iran. War plans were drawn long ago, ready to be implemented if other ways aren't able to topple its government - Israel's top geopolitical priority.

Last May, Pompeo threatened the toughest sanctions in history if Iran doesn't bow to unacceptable US demands no responsible government would agree to.

Pompeo turned truth on its head, claiming "Iran has lied for years about having had a nuclear weapons program. Iran entered into the JCPOA in bad faith. (It) continues to lie."

"The mechanisms for inspecting and verifying Iran's compliance with the deal were simply not strong enough. (Its) ballistic and cruise missiles could deliver nuclear warheads."

It "spen(ds) its resources fueling proxy wars across the Middle East…Iran perpetuates a conflict that has displaced more than 6 million Syrians" internally and millions more "outside its borders."

All of the above are bald-faced lies, the way the US vilifies all its enemies and adversaries.

He called for unlimited access to all facilities in the country, including military ones - what no nation would agree to.

He demands US and other individuals detained or imprisoned for terrorism and other violent crimes be released if the Trump regime demands it.

He called for ending support for Hezbollah, Hamas and Islamic Jihad, falsely designated terrorist groups by the State Department at Israel's behest.

He demands Iran cease support for nations, groups or individuals the US considers adversaries or enemies.

He demands Iran cease its nonexistent support for "terrorists" - a US/NATO/Israeli specialty, not how the Islamic Republic operates.

He called for ending nonexistent threatening actions by Iran against regional states - another  US/NATO/Israeli specialty. The Islamic Republic is the region's leading proponent of peace and stability.

No Iranian "malign influence" exists in the region or anywhere else. The US, NATO and Israel are its "most significant threats" - not Iran, Syria, Hezbollah or Hamas.

On Tuesday, Pompeo said the Trump regime intends "redoubling not only our diplomatic but our commercial efforts to put real pressure on Iran."

The Islamic Republic is a regional force for peace and stability. The US, NATO, and Israel feature "destabilizing activities" - by waging endless wars, the Trump regime's illegal JCPOA pullout, likely worse to come during the rest of his tenure.

Pompeo and Bolton overruled DLT on withdrawing from Syria. A previous article said permanent US occupation is planned. Turkey's Erdogan believes the Pentagon has 22 military bases in the country.

I cited 18 in a previous article, saying at the time as least one more is being built, along with two new ones in Iraq near Syria's border.

Pentagon commanders won't likely relinquish control over their entrenched positions in either country - or any others.

The US occupies nations to stay, using them as platforms to attack other countries. In response to Pompeo's remarks in Jordan, Iranian Foreign Minister Mohammad Javad Zarif said "the pure obsession (by Pompeo and other Trump regime officials) with Iran is more and more like the behavior of persistently failing psychotic stalkers."

He believes peace and stability will be restored to the region, resistance against America prevailing over its imperial aims.

He slammed the Trump regime for its JCPOA pullout, defying the world community by its action, making the US more of a pariah state than already.

Nations breaching their obligations and favoring wars over peace have no right to demand anything from other countries, he stressed.

Zarif explained that tough US sanctions "hurt ordinary Iranians, but don't change (the Islamic Republic's) policies" - not since its 1979 revolution or looking ahead.