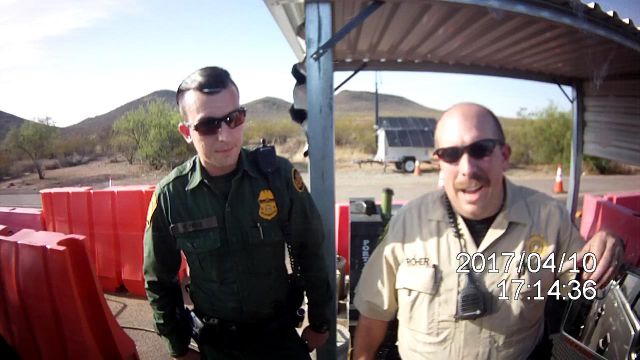 In a 3 to 2 vote earlier this month, the Pima County Board of Supervisors opted to reject $1.4 million dollars in federal funds associated with the Operation Stonegarden grant program for the first time since the Pima County Sheriff's Dept. began participating in the program sometime around 2012-2013:

Given that the Pima County Sheriff's Dept. was recently served with a Notice of Claim by CPUSA for a Stonegarden incident that took place last year, I was encouraged by the board's actions. Unfortunately, once the Pima County Sheriff's Dept. became aware of the vote, the department quickly mobilized the PR machine & convinced district 2 supervisor Ramon Valadez to call for a revote at the next scheduled meeting on February 20, 2018.

The homeland security grant in question has been paying county deputies over the past five years to merc themselves out to the Department of Homeland Security and Customs & Border Protection. Under the terms of the grant, deputies get paid overtime to conduct zero tolerance patrols under the close supervision of the U.S. Border Patrol. Indeed, the watch commander for deputies conducting Stonegarden patrols is not a PCSD employee but rather a federal agent.

I first became aware of the Stonegarden program back in 2013 after having a run-in with a county deputy responding to a bogus Border Patrol call for assistance. A few months later, I observed a different deputy stationed at the roadblock assisting the Border Patrol and decided to ask a few questions regarding the nature of the operation:

Since then, I've been able to gather together more comprehensive information regarding the joint operation and provide links below to documents associated with the Pima County Sheriff Department's involvement in it:

To provide a visual representation of the statistics linked to above, I tabulated the numbers and generated a graph below: 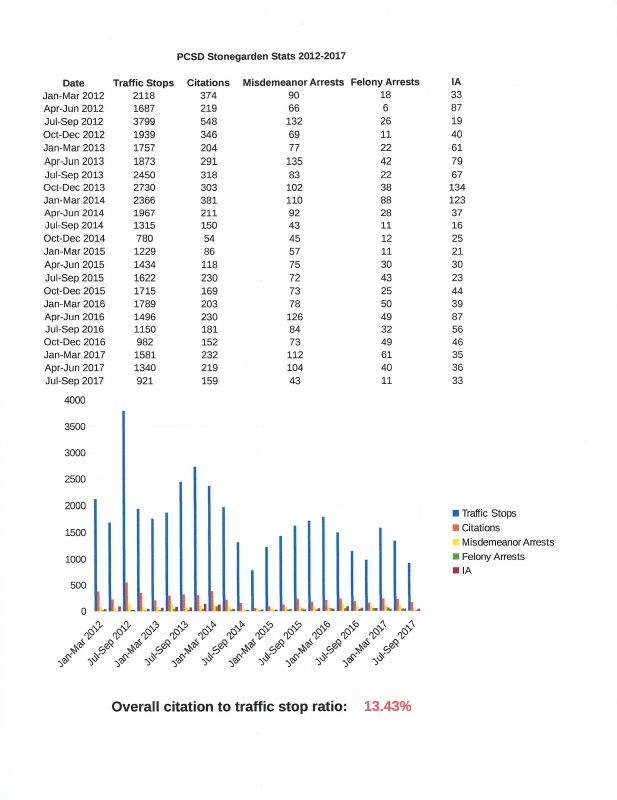 One of the most interesting numbers to fall out of the statistics above is the 13.4% citation to traffic stop ratio. By itself, the ratio doesn't provide much context but when compared to citation to traffic stop ratios from other law enforcement agencies, a disturbing trend begins to emerge. Specifically, the average ratio of citations to traffic stops across the country is roughly 60%. This includes agencies such as the Tucson Police Department & the Maricopa County Sheriff's Department. When the ratio is as low as it is under the PCSD Stonegarden program, that indicates serious problems with the legality of the PCSD traffic stops in general (lack of reasonable suspicion or probable cause) and the presence of racial profiling in particular.

When one considers the history of abuse associated with CBP roving patrol and checkpoint operations in Pima County, the problems associated with CBP exerting influence over PCSD deployments under Stonegarden become even more apparent. This in turn is exacerbated by the financial incentive deputies have to conduct operations the way their handlers in CBP want them to.

When the above analysis is combined with the fact that the PCSD does not offer any training to deputies conducting Stonegarden deployments – especially when those deployments are carefully choreographed by Customs and Border Protection, a real problem starts to become apparent: 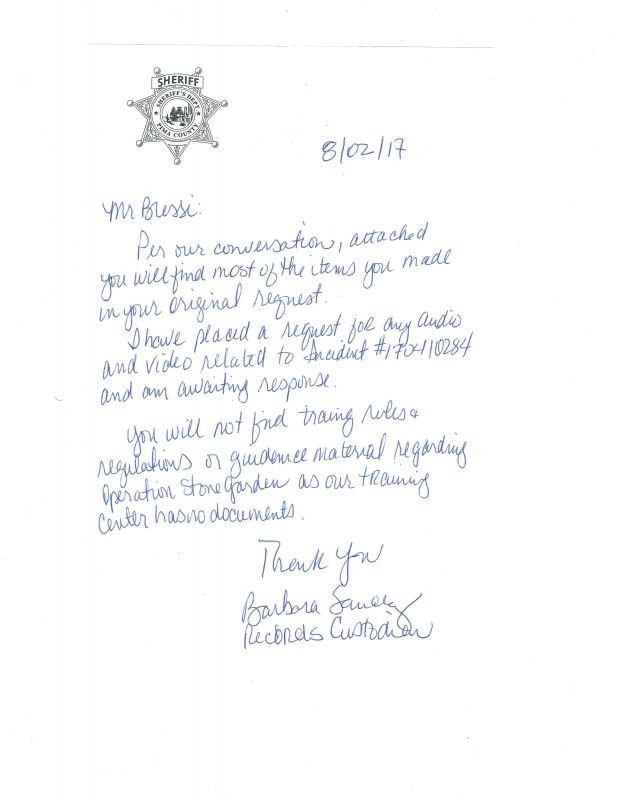 To help illustrate just how closely the PCSD and CBP coordinate their enforcement activities under the program, I've linked to a pdf document I created last year that addresses the issue and include the text of the document below:

The terms of the FFY 2016-2017 Operation Stonegarden Grant Program require a high level of daily  involvement, coordination & information sharing between the Pima County Sheriff's Department and the US Border Patrol. Indeed, the grant specifically requires that the Border Patrol maintain operational control over PCSD deployments and that all actions taken by the PCSD during deployments be in furtherance of the Border Patrol's mission.

Given the core differences in authority and missions between the two agencies, the nature of the control/influence being exercised by the Border Patrol over the decisions and actions of local law enforcement personnel under the terms of the Stonegarden agreement raise several disturbing questions regarding the legality of the operations in general and the effect on the civil rights of individuals stopped by sheriff deputies in particular.

Terms and language used in the Stonegarden grant award that are especially troubling & indicate the PCSD is being used as nothing more than a tool to expand the Border Patrol's enforcement reach into areas traditionally outside it's legal authority follow:

* The grant requires the PCSD to conduct 'zero tolerance' traffic patrols for the specific purpose of increasing the number of contacts with members of the traveling public:

* Stonegarden enforcement action between 2012-2017 show a 'citation to stop' ratio of around ~13.4%, a number that falls well below the ~60% average for other local law enforcement agencies operating in Southern/central Arizona. This in turn is a strong indicator that many stops by the PCSD are being conducted absent reasonable suspicion or probable cause. Note, unlike Border
Patrol agents, county deputies have no inherent authority to stop vehicles based on reasonable suspicion that the occupants may be in the country in violation of federal law.

* The grant requires sharing of intelligence information between the two agencies

* The grant instructs the PCSD that it must use its own resources for any legal representation that may be necessary during the time period the grant is in effect. Note, the Stonegarden grant program is not related to any federal 287(g) program and deputies are not granted authority under Stonegarden to enforce federal immigration law.

Specific quotes from the grant program supporting the above points follow:

1.) FFY 2016 Operation Stonegarden Grant Program Award (p1):
"All overtime deployments must be pre-coordinated with the Border Patrol in order for your agency to be eligible for reimbursement"

2.) Mission (p7):
"The primary objective of this operation is to deny the use of routes of egress along the Arizona/Mexico border and support the primary mission of anti-terrorism, detection, arrest prosecution and deterrence of all cross-border illicit trafficking. Strict and aggressive enforcement along roadways and other routes used by these criminals will close corridors that serve as potential entry avenues for terrorists and other risks to national security. In carrying out this enforcement, the Pima County Sheriff Dept. will work closely with the U.S. Border Patrol, Tucson and Nogales Sectors, US Customs and Border Protection Intelligence & Situational Awareness Office of Intel & Ops Coordination, USCBP ACTT and DHS Field Reports Office."

3.) Execution, Management/Supervisor Intent (p8):
"Officers deployed to the target areas will conduct 'zero tolerance' traffic contacts. This aggressive deployment will result in increased contacts with people and vehicles traveling these roadways and pathways used by criminal/terrorists for illegal entry into the United States."

6.) Border Patrol Responsibilities (p9):
"Operational Control: Border Patrol management at the Sector and Station level will closely coordinate with participating agencies and ensure that deployments are in alignment with station and sector objectives."

8.) Border Patrol Responsibilities (p9):
"Border Patrol will identify a sector and/or station point of contact that will:

15.) Stonegarden Deployments (p10): "
"Pre-coordinated ad hoc OPSG Operations: SLT Officers/Deputies may conduct ad hoc operations which are not part of a named operation or are not part of the block schedule if pre-coordination has taken place with the appropriate Border Patrol Station or identified Border Patrol Point of Contact. NOTE: per Grant guidelines, supplanting normal activities is not allowed and will not be reimbursed. As with all OPSG deployments, a direct nexus to supporting the border security efforts must be illustrated."

16.) Legal Review (p17):
"Each individual SLT agency that submitted an Operations Order and Budget to participate in the operation is responsible for their own agencies protocols and legal representation as directed by their charter."

In addition to the zero tolerance patrols conducted by deputies under this program, deputies have also been stationing themselves at CBP roadblocks in Pima County despite having no lawful authority to engage in limited scope federal immigration roadblock operations. The NOC CPUSA served on the PCSD in October of last year highlight many of the problems that have resulted from these joint roadblock operations.

Given all the problems associated with the Stonegarden program, the Board of Supervisor's should reject funding for it. To continue funding the program knowing how it is being abused by CBP and the PCSD creates legal and financial liability for the county while calling into question every enforcement action that has been and will be taken under the program.

Federal immigration enforcement is the responsibility of the federal government. The Pima County sheriff's department should go back to serving the people of Pima County instead of unelected special interests originating from Washington, D.C along with some deputies who like padding their pay checks by doing the bidding of the U.S. Border Patrol.

The agenda for the Pima County Board of Supervisors meeting on February 20, 2018 is available here. Contact information for members of the board appear below: