Ernie,
You are pretty good at predictions.
Where is this headed? I feel like this abuse is just the frying pan.
Fellow Freedom Activists,
More "War/Fear is the Health of the State" ...stuff. If the American people turn to violence then the government will use that as a rationalization for more Police State type actions to preserve _Order_ etc.
Threats "Domestic, Foreign or even Galactic" will increase as a herding technique for Government Livestock (people).
But there are soooo many 'Ranchers' (levels of government) making claim to us and our property that they will eventually start fighting each other (it's already started).

The more I try to remove myself from the minutia of the 'Police State' and their ways, the more I am able to _feel_ the long term effects from our perspective ( Got Chic Chic Chickens? :). But I can only imagine what their goals are for each of us. Everything points to our 'just going away' as a solution to all of their perceived problems. 'Freedom is Not the Answer to any of their Questions'.

It is much easier to avoid all of the expected obligations/entitlements promised to 'The People' if the people just went away,... metaphorically and/or literally. When we look back 20 years from now we might think that 'conspirists' like Alex Jones were too conservative in their predictions about desires to 'thin the herd'.

But whatever 'EVIL Plan' there might be for us, I'll bet that it includes a full naked body inspection throughout our travels... and harassment/beating/incarceration if we don't submit.
Highlighting this understanding is a very good way of framing the issues involved.
The Understanding that 'The King requires us to appear before him naked or be searched and groped by the hands of the King's men" is a very important step in any revolution of thought in this country.
A revolution is now inevitable in my opinion and the longer we can keep it peaceful and non-violent the better. 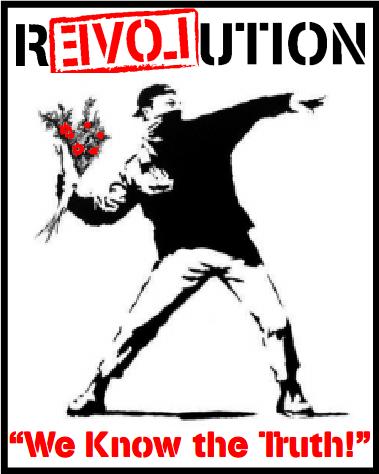 In fact I suspect that those with the power to crush any resistance are very upset that there have not been more 'actions' by the American people, while at the same time doing everything they can to keep us sedate, confused and unaware of what is really going on.
A clear understanding of what has happened, how it was done and by whom/what will be the first step towards any real sea change,... and They Them Those know it, and are afraid. The fear is what amplifies their danger to us all.
The Bad Guys are best served by some really good examples of "Why They Need Us" (gov't). And they'll create these examples if they need to.

The local 'rubber meets the road' thugs are just mercenary pawns in a much larger effort being viewed from a lot farther away. The parallels throughout history are too obvious to think that there isn't some 'destructive character trait' or 'playbook' for powerful people and organizations that is playing out right in front of us.

I am of the opinion that we are best served by not using force. If people anywhere start becoming violent I suspect that they are unlikely to know who/what the real sources of their problems are, or what solution is to be sought with the violence. The longer we are peaceful, the clearer the enemy is identified. I'm certain there is some "Art of War" quote that promotes 'Knowing who/what the hell you are suppose to be fighting and why'.

My meeting with the Phoenix Police and the TSA this coming Weds. isn't to ask permission for voicing dissent at Sky Harbor Airport this Thanksgiving, it's to remove the fear being generated for and by both sides of the argument. There will come a time when we are not allowed to complain (like in line at the TSA checkpoints) across the entire nation. This trait of Big Bubba Government will not go unnoticed and the individuals asked to enforce such silencing should be made aware of the Ominous Parallels of their actions and the effect on our society, individuals and themselves.
Information is very powerful for a reason; it allows Human Beings the ability to make a correct decision. It is why the centralized power desires centralized 'approved' information dissemination.

The biggest threat to those that 'Just won't leave us alone' is a general understanding by any populace that the only justifiable existence of any government, that can benefit from individual financial/emotional support of being 'governed', is to make sure that we as individuals are left alone to peacefully pursue our own happiness without violating the pursuit of happiness of another.

What is coming is already destined by history, circumstances, math and momentum. How we react to the financial collapse (and all that comes with that) will determine our future. Education is the most important thing now. There will likely be physical resistance to collective force, but I suspect that it will be on an individual basis long after our society has woken up to a Jackboot on its throat.

Knowledge is the first step to resistance.

"In the end Freedom Always Wins,... It just gets really messy first".

3 Comments in Response to Ernie, You are pretty good at predictions. Where is this headed?

I agree with the statement that the longer we keep things non-violent the better, but I disagree with the statement ""There are those that just want to be left alone,... and there are those that just won't leave them alone".  Instead, I think there is a third  organized party acting acting behind the scenes as an instigator, and profiteer on other peoples misery. While liberals and conservatives seem to be bashing each other relentlessly in the press, the real story is that a New World Order of Global Corporations owns the presses that give us that impression. They instigated the fights, created the bankruptcies, and continue to fleece the people of our nation for everything they own. Unfortunately, the next step is to thin the herd, and remove the threat that those who lost everything might come back one day to reclaim it later. To avoid that step we to keep it non-violent. Liberals and conservatives need to bind together in a pact of non-violence so as to end economic colonialism and "Take Back America" from the New World Order of Global Corporations.

I was asked if the meeting with the Phoenix Police and the TSA this coming Weds. is an open meeting. HELL NO!

If you want to voice your dissent then the following week, the day before Thanksgiving is the time, along with the rest of the country.

There will be some FreedomsPhoenix staff there to witness and we'll do our best to document the meeting to the point that it doesn't interfere with the acquirement of needed and stipulated to and accurate information about our abilities to dissent without threats of force or violence. My goal is to fully understand and document the agreed to lines for people to complain. What people do as individuals after that understanding is totally up to them. But before I go charging the ramparts I need to know exactly what me and my friends are up against. What others do with this information is TOTALLY up to them as individuals.

This scheduled meeting is NOT the time to "protest" or to make a big media event. That would be counter to what we hope to learn.

The cooperation from the Phoenix Police on this issue is due to their desiring the same understanding because they have absolutely no clue either.

Do all Phoenix Police have to be deputized as Federal Marshals to work there, and to whom/what do they answer?

The meeting this Weds. (should the TSA not back out,... I'm pretty sure that the Phoenix Police will come, this will be their 3rd time at the Workshop for such a meeting) will be to get as much information as possible so that well intentioned volunteers are not walking right onto a bus headed for Guantanamo without understanding what the risks are.

Save your energy for the national focus on the Weds. before Thanksgiving. I might go or I might not, but the first thing I always do is know what the hell I am dealing with and what role everyone is going to play. The fact that the Phoenix Police have absolutely no clue where their directions are coming from about what lines are to be enforced is of great concern to me,.. this is exactly how people wind up dead.