Join-Us | Log-In
Freedom Forum | Translate
In Colorado, there is a town called Leadville. The town got that name because the area is rich in lead, and lead mines were the earliest economy there. The town was built on lead,...literally. Lead runs through the entire crust of the earth underneath and around Leadville. Yet, despite this, the water pumped from the ground underneath Leadville has never been shown to be toxic. It tastes nice, and residents of Leadville have no higher occurrance of cancer or lead-based illness than almost anywhere else in the country.
But politicians hostile to guns have been using growing public concern for the environment in recent decades as a tool for trying to limit and harrass gun owners, by claiming that lead projectiles deposited into backstops at shooting ranges contaminate ground water that seeps into aquifers and water tables. But an unforseen consequence of making such accusations is that knee-jerk environmentalists take that junk-science and don't merely attack civilian gun use, but military activity as well.
And so it has developed over the last few decades that the Army has been under pressure to develop lead-free alternative ammunition; if not for general use in war, then at least for use in training, which primarily happens on U.S. soil. And it is that soil which we are most concerned about.

Developing a lead-free cartridge is not as easy as it seems. There are many technological and performance hurdles that have to be overcome. But in the 90's, the Army introduced a "green" bullet for the infantryman's service rifle that it had spent years developing. Using tungsten instead of lead as the main component, it was touted as being the solution to evironmental concerns over contamination of water supplies by gun ranges. And it wasn't cheap, either. At 15 cents more per round above the cost of traditional lead-based rounds, the "green" ammo was almost double the cost.
But research by University of Arizona Professor of Pediatrics, Mark Witten, found that tungsten is actually much more toxic than was previously believed, and elevates the risk for cancer. Study of cancer clusters in Fallon, Nevada and Sierra Vista, Arizona (both hubs of tungsten mining activity) have led reseachers to conclude that tungsten is to blame. As tungsten's toxicity has become known, some leaders have become alarmed that the "green" ammo designed to be eco-friendly and non-toxic has in fact been making the previously phantom problem of water contamination very real, and have demanded use of this ammo stop. Mitt Romney, as Governor of Massachesetts, was the first to demand a halt to the use of tungsten ammo in 2004, ordering the Massachusetts National Guard to cease its use immediately. Other select governors have followed suit, and even some base commanders have exercized their own discretion to not use it.
The Army's Lake City Munitions Plant in Missouri stopped producing the projectiles and loaded ammunition when it became unclear if existing stockpiles would ever be used, and in September of 2008 sold 95,000 tons of incomplete projectiles "in various stages of production" for scrap at fire sale prices. Over 90 million rounds of this "green" ammo has already been expended in the U.S. in training, and estimates that at least that much remains in inventory.
Fast forward to this week.
The ARMY TIMES announces that soldiers in Afghanistan will be receiving the "new" Enhanced Performance Round. Listed as "lead-free", the ARMY TIMES never reveals what alternative component is used in the ammunition, but among the listed attributes of the EPR bullet is "improved hard-target capability",...which certainly sounds like tungsten to me. (Tungsten cores have been used in armor-piercing ammo since before WW2.) 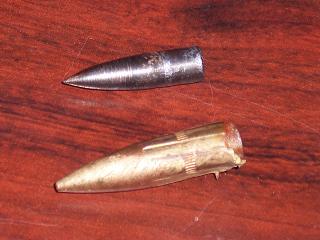 Could it be that the Army finally found a way to dispose of all that toxic tungsten ammo it has in inventory;...expend it on the enemy?!
After all, if this stuff gets into the Afghan water table and rates of cancer for generations in Afghanistan increase, it can always be blamed on ordnance expended by the Russians.

2 Comments in Response to "Green" Army ammunition banned in the U.S. as too toxic is now going to Afghanistan?!

No need to appologize Hugh. I admit my knowledge of this is limited, and it sounds like you have direct intel on the development of these alternative ammunition lines. Since we seek to know the truth here at FP, your input is welcome, even if it is corrective. Feel free to add your wisdom at any point in the future on subjects such as this of which you have knowledge.

Your time line and story was correct up to the point about abandoning the tungsten bearing round due to the potential health and pollution problems were discovered.  We in the business called that the M855A1 (Version 1.0), and it was a very costly mistake based upon faulty research and data.  By the way all stocks of the tungsten bearing (Tungsten/Tin composite slug) Version 1.0 ammo was in fact destroyed and all the scrap sold off (but not as bullets or ammunition) at a significant loss or cost to the taxpayer.

Next came the M855A1 (Version 2.0) which was made with the same internal structure as the baseline M855 and the M855A1 (Ver 1.0) but the Lead or Tungsten/Tin slug portion was replaced with a Bismuth/Tin alloy slug.  When this ammunition was fired at elevated temperatures the Bismuth/Tin alloy (a eutectic or low melting point alloy) became mushy and the bullets did not all stabilize properly and did not fly right, thus died the M855A1 Version 2.0 attempt to make a green bullet.  Actually this effort was also not all that well researched either because no one seem to have remembered that Bismuth/Tin alloy(s) are eutectic low melting point alloys, which almost all engineers know or should know well.

Now to the current M855A1 (Version 3.0), an entirely new design with an exposed steel penetrator seen in the picture as a Brown colored part of the projectile point, behind that steel penetrator, within the guilding metal bullet jacket is a single copper alloy slug.  So the Version 3.0 M855A1 projectile does not in fact use the failed Tungsten/Tin alloy slug or any related materials at all.

All of that said however this whole Army green ammunition project has been extremely expensive and ill conceived to date and in retrospect.  It is very questionable as to whether or not the latest Version 3.0 is indeed any better or even equal on soft (tissue) targets, i.e., enemy troops than the old M855 projectile that it is supposed to replace.  It is however much better at defeating hard intermediate barriers, such as 3/8" mild steel, concrete blocks, auto windshields, truck doors, etc., but that is in an open environment like Iraq and Afghanastan.....if we ever have to fight in Central or South America the designed in tendancy of of this projectile type to break up easily, on tree limbs or heavy vines (and various other intermediate barriers such as Chinese Level III body armor) used as cover and conciealment in jungle and tropical forests will severely limit it's effectiveness, especially for our special forces troops who may have to fight there.  But that's for some future war(s) and other people to think about.......enough money has already been spent (wasted?) on three failures in a little over a decade....  Yes, I know this sounds harsh perhaps but those are the facts as I see them having spent more than 45 years in the field.