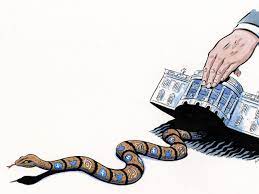 I absolutely abhor snakes. I've often mused to myself that instead of Pfizer, Moderna, Johnson and Johnson, Astra Zeneca et al. conjuring up toxins that are deadly poisons designed to bring about the damnable fantasy of decreased global population vis-à-vis pharmaceutical extermination centers, it would be nice if they combined their efforts and developed a substance that would kill all snakes immediately while being completely harmless to all flora, fauna, animal and human life.

Which brings me to my contempt for the Republican elapid Paul Ryan and all Republicans like him. Disgusting and offensive are specific traits possessed by Ryan and his ilk, but as pathetic and worthless as he is notwithstanding, it's a steep step further down when he shows his hatred for that segment of American citizenry who truly loves and embraces what America was intended to be, by saying: "Anyone not named Trump can beat Joe Biden in 2024."