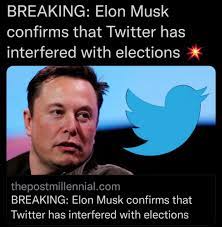 Elon Musk confirmed on Wednesday that Twitter has interferred with elections.

In response to a report from Reuters about Twitter's move to free speech under Musk, he replied that "The obvious reality, as long-time users know, is that Twitter has failed in trust & safety for a very long time and has interfered in elections. Twitter 2.0 will be far more effective, transparent and even-handed."

Twitter has shown itself to be not safe for the past 10 years and has lost users' trust. The past team of "trust and safety" is a disgrace, so it doesn't have any right to judge what is being done now. They had a chance, but they sold their souls to a corporation.

New book: How Pennsylvania overcame a 700,000-vote deficit against Trump