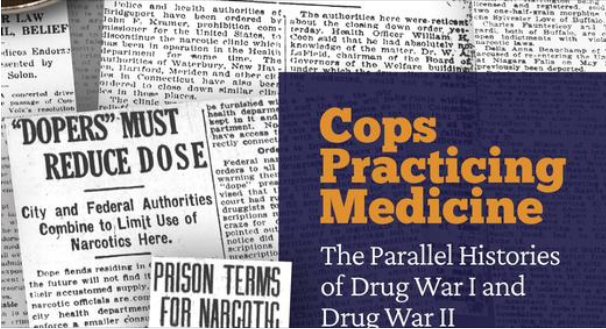 Just released. I co-authored this paper with Trevor Burrus, JD, at the time a Research Fellow in the Robert A. Levy Center for Constitutional Studies at the Cato Institute. This is the link to the digital version:https://www.cato.org/white-paper/cops-practicing-medicine#conclusion

Here is the link to the pdf:

And a soft-bound copy is available upon request from the Cato Institute.

In a few weeks, Cato plans to release what it calls a "digital earthquake" as a companion to this white paper that will contain video and written narratives by doctors and patients. Stay tuned for that...

The Parallel Histories of Drug War I and Drug War II

Government and law enforcement increasingly surveil and influence the way doctors treat pain, psychoactive substance use, and substance use disorder.

By Jeffrey A. Singer and Trevor Burrus

People have used opium and its derivatives both medically and recreationally since antiquity. However, since the early 20th century, law and society have viewed people who use opioids, cocaine, and certain other psychoactive substances as immoral and even criminal. For more than 100 years, this viewpoint has destructively intruded on the patient??doctor relationship. Government and law enforcement increasingly surveil and influence the way doctors treat pain, psychoactive substance use, and substance use disorder. This change has happened in two discernible waves, which we call Drug War I and Drug War II.

Drug War I occurred after Congress enacted the Harrison Narcotics Act in 1914, which permitted doctors to prescribe opioids to treat their patients. A wave of arrests and prosecutions of thousands of doctors ensued as agents of the U.S. Treasury Department, empowered to enforce the act, took it upon themselves to define legitimate medical practice.

Drug War II began in the 1970s, with government??funded education/?indoctrination campaigns that caused both doctors and patients to fear opioids for their addictive and overdose potential. Later, as the scientific literature led medical specialty organizations and government health officials to overcome this apprehension and take the treatment of pain more seriously, opioid prescribing increased considerably.

By 2006, federal regulatory agencies perceived what they called an "opioid crisis" and mistakenly attributed it to doctors "overprescribing" opioids and generating a growing population of opioid addicts. This formed the basis for an even more massive intrusion of federal and state power into the privacy of medical records, patient??doctor confidentiality, and the very way in which doctors are allowed to use scientific and professional knowledge to practice medicine. Medical decisionmaking came increasingly under the purview of law enforcement, sparking a new wave of arrests and prosecutions.

Patients who had their pain controlled with long??term opioid treatment are being denied treatment or involuntarily tapered off their pain control, as doctors fear arrest and an end to their medical careers. A growing population of "pain refugees" has emerged, with some patients turning in desperation to the black market for opioids and some even turning to suicide. As prescribing rates continue to plunge, overdoses from the nonmedical use of opioids are skyrocketing, now largely caused by illicit fentanyl.

The medical mismanagement of pain, which causes harm to patients, is best addressed through the civil tort system. Additionally, states establish professional licensing boards specifically to enforce the "standard of care" rendered by the professionals they oversee. Law enforcement has no medical expertise and should have no say in classifying narcotics and psychoactive substances. Lawmakers should avoid passing or repeal any laws that cast in stone prescribing guidelines released by any state or federal public health agencies. Federal and state law enforcement should be required to get a warrant before perusing state prescription drug monitoring program databases. Law enforcement should be required to report any suspected standard??of??care deviations to state professional licensing boards for review and adjudication. Neither the practice of medicine nor the act of self??medication belongs in the realm of the criminal legal system.