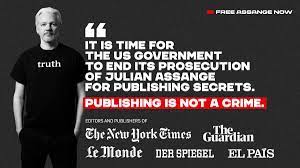 This sudden jolt of mainstream support comes as news breaks that Australian Prime Minister Anthony Albanese has been personally pushing the US government to bring the Assange case to a close.

The Guardian's participation in this letter is particularly noteworthy, given the leading role that publication has played in manufacturing public support for his persecution in the first place. If The Guardian really wants to help end the persecution of the heroic WikiLeaks founder, the best way to do that would be to retract those many smears, spin jobs and outright lies, and to formally apologize for publishing them.

This is after all the same Guardian which published the transparently ridiculous and completely invalidated 2018 report that Trump lackey Paul Manafort had met secretly with Assange at the Ecuadorian embassy, not once but multiple times. Not one shred of evidence has ever been produced to substantiate this claim despite the embassy being one of the most heavily surveilled buildings on the planet at the time, and the Robert Mueller investigation, whose expansive scope would obviously have included such meetings, reported absolutely nothing to corroborate it. It was a bogus story which all accused parties have forcefully denied and no serious person believes is true, yet to this day it still sits on The Guardian's website without retraction of any kind.