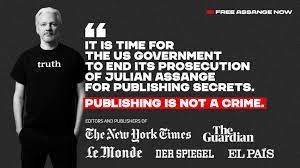 Five major Western news organizations have finally spoken out for WikiLeaks founder Julian Assange and are calling on the US government to drop the charges against him.

In a letter to the US government, the editors and publishers of The New York Times, The Guardian, Le Monde, DER SPIEGEL, and El País said that "publishing is not a crime" and that it was time for the US "to end its prosecution of Julian Assange for publishing secrets."

The five news outlets benefited greatly from documents released by WikiLeaks and worked with the organization to publish State Department cables in a release known as "Cable Gate." The letter explains that for receiving those leaks and the Iraq and Afghanistan war logs from whistleblower Chelsea Manning, Assange has faced "the most severe consequences."

The letter reads: "On 12 April 2019, Assange was arrested in London on a US arrest warrant, and has now been held for three and a half years in a high-security British prison usually used for terrorists and members of organized crime groups."