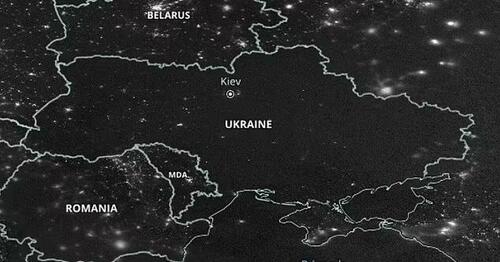 Initially, Ukraine's media spin suggested that the precision strikes were "ineffective", with western news outlets showing only a handful of images of craters in streets and some scarred apartment buildings.  There were limited admissions of damage to the power and water grids, but Ukraine claimed that these systems would be back and functional within days.  This did not happen.

Not surprisingly, Ukraine suffered far more damage to their utilities than the government and media let on.  Later estimates ranged from 60% to 80% of the nation's grid destroyed or unusable and the latest satellite photos of active lights at night support this.  Below, we can see lights across Ukraine on February 24th at the start of the war.

Next, we have an image taken from November 24th.

Celebrities Protect The Interests Of The Empire: Notes From The Edge Of The Narrative Matrix