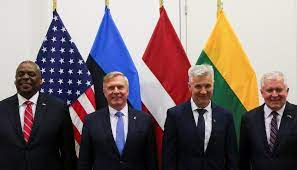 In an exclusive interview, Dr Gunnar Beck, MEP for the Alternative for Germany (AfD) party, said that there is a lack of calls for peace in Ukraine in Europe and America because politicians have made the miscalculation that Ukraine can prevail and that the Russian people will turn against Vladimir Putin.

"There is a lot of triumphalism right now, talk of Russia being pushed back to its pre-conflict borders and I think that's misplaced triumphalism. What we need in Ukraine, above all, is a genuine compromise peace as soon as possible," Dr Beck told Breitbart London.

"I don't have a crystal ball, but my sense is that it is a miscalculation and if it is, I rather doubt that the Russian population will cease to support President Putin if the conflict is increasingly perceived there in terms of not just a conflict with Ukraine but with the whole of the West."

'Mr Scholz, Tear Down This Wall' – Zelensky Channels Reagan to Call Out Germanyhttps://t.co/Wpg9aoG7kW