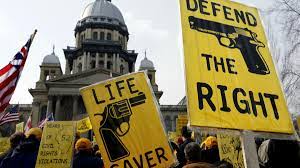 In late September 2022, the International Organization for Standardization (ISO) announced the creation of a Merchant Category Code (MCC) for firearms. Prior to the announcement, firearms were lumped into the MCC for general merchandise. Gun control advocates lauded the move.

The measure did not gain ground with Americans in the federal capital, however.

A poll by FOX 5 that asked if they agree with credit card companies tracking gun sales found that three in four respondents said no to the measure. This came as a surprise as Washington, D.C. is known for having the most stringent gun laws in the nation and overwhelmingly supporting politicians who back gun control.

It's all about tracking Americans

If Women Had The Same Rights As Guns