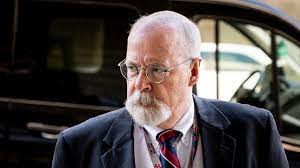 "Our efforts in terms of investigating Hunter Biden and corruption within the FBI was certainly hampered because we had an active criminal investigation under John Durham," he told Newsmax on Sept. 30, noting that Durham so far has successfully prosecuted few individuals in connection to his investigation.

Overall, Johnson said he's "not particularly satisfied" with Durham's probe and the lack of convictions, including what he described as a failure to secure a conviction for lawyer Michael Sussmann. Sussmann was accused by Durham of lying to the FBI while he was working for a law firm representing the Hillary Clinton campaign in 2016 but was acquitted in May.

Durham was appointed in 2019 by then-Attorney General William Barr to investigate government misconduct in the FBI Crossfire Hurricane investigation. So far, the investigation has netted the conviction and sentencing of former FBI lawyer Kevin Clinesmith, who received probation last year.

"And at a minimum, I certainly hope that whatever report [Durham] turns in to Attorney General Merrick Garland that that report be made public," Johnson said. "The American public deserves to know the truth of the corruption that was occurring within the Department of Justice in the FBI."