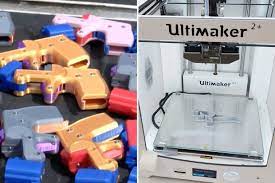 A man named "Kem" printed 110 firearms on a $200 printer he got for Christmas and turned them into a gun buyback program held at the Utica Police Department in Oneida County, New York.

"I 3D-printed a bunch of lower receivers and frames for different kinds of firearms," Kem told local media WKTV.

He drove six hours across the state to turn in the firearms he printed in August, collecting a whopping $21,000 from the New York State Attorney General's Office.

WKTV contacted the state Attorney General's Office about 3D-printed firearms, though there was no response to that question besides it being a 'big success and that the program, in general, keeps New York families safe.'

"I'm sure handing over $21,000 in gift cards to some punk kid after getting a bunch of plastic junk was a rousing success," laughed Kem.