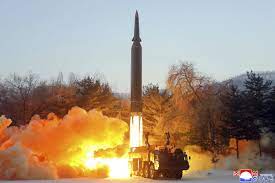 The JSC added that South Korea and US intelligence authorities are still analyzing more details.

South Korea slammed the North Korean ballistic missile launch, saying it deters peace and security of the Korean Peninsula and the international community, and it strongly condemns it as the launch is a clear breach of UN Security Council resolutions.

The Japanese government warned residents in some remote islands that are part of Tokyo as well as Hokkaido and Aomori prefectures to take shelter from a missile fired from North Korea.

?Live streaming?The Japanese government is warning that North Korea appears to have launched at least one ballistic missile. There's a possibility it's heading toward Japan. The government is urging everyone in the country to take shelter immediately.https://t.co/QbGNxw7brV