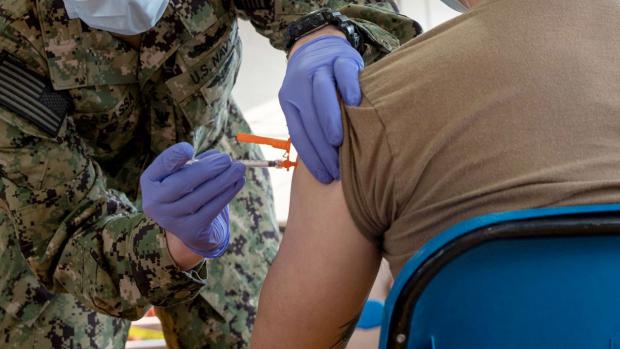 Navy Petty Officer Second Class Kristin Fregeau is being discharged from the Navy for attempted desertion, but her attorney contends that this is a cover for separating the officer because she had a religious objection to the vaccine mandate.

"The Navy couldn't separate [Fregeau] for vaccine refusal, so they drummed up a story about attempted desertion," Sean Timmons, Freugeau's attorney, told The Epoch Times.

The attempted desertion charge arose from Fregeau leaving her base for 20 days in December 2021 without prior approval.

But Timmons said the petty officer moved to Tennessee during that period to remove her child from moldy living conditions at the base that was harmful to their health.

"She moved her family under duress, and out of necessity, away from mold-infested government quarters to move her children to reasonable living accommodations," the attorney said.

In March 2020, Fregeau was temporarily assigned to shore duty at Navy Air Logistics Office (NALO) in New Orleans where she could receive help for dealing with postpartum depression. By November 2020, she had checked herself into a hospital program for mental health issues and began to address her struggles with some success.

After returning to her previous work assignment at NALO, she began to experience mold issues at her residence. After many encounters and arguments with the housing administration, Fregeau said the ducts were cleaned and the leaking air conditioning unit was replaced.