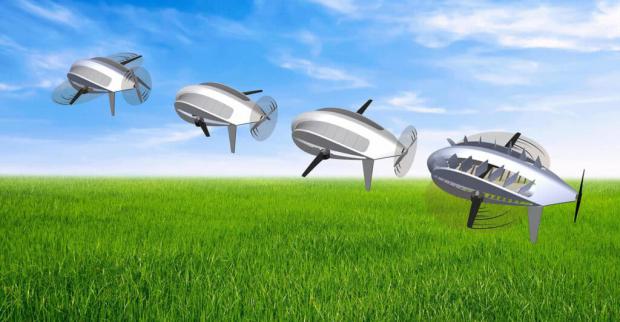 Blainjett's fascinating hemispheric rotor concept is a totally unique and left-field approach to VTOL flight. The company (no relation to me, for the record!) came up with the bones of the idea while working on the Horizon eVTOL hoverbike, which we covered back in January, and trying to solve the problem of how to generate lots of efficient vertical thrust without taking up large amounts of space or exposing bystanders to fast-spinning propellers.

You could use a bunch of small ducted fans, something like what Lilium is doing in the air taxi segment. But small fans are extremely inefficient in VTOL lift and hover mode – Lilium is banking on its design making more sense in longer-range flight, where its low drag might give it an advantage over large-prop competitors. The hoverbike would be spending all its flight time in hover mode; small fans would kill its endurance, bigger ones would end up something like the treacherous Hoversurf Scorpion, which looks like a great way to cut down on limbs if you feel like you've got too many.

Blainjett's solution was to go with big, variable pitch rotors for efficiency, but to tuck the entire retreating half of the swept disc away under the bike's bodywork. Using a split swashplate, adapted from the helicopter world, they devised a system that would immediately ramp the blade pitch down to fully horizontal every time it went into its slot in the bodywork, then ramp it back up to a positive lift pitch when it emerged on the other side.

The result, according to Blainjett president Cary Zachary, was a system that took up about as much space in the aircraft's top-down footprint as a set of smaller, ducted fans, but with huge advantages in thrust output and efficiency – a factor of two to three times better on each metric.