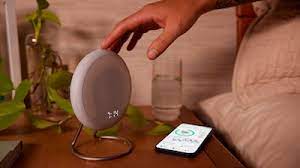 Soon enough, a bedside Amazon device might know whether you're sleeping — or not.

The e-commerce and tech giant said Wednesday it will start selling a device later this year that can track sleeping patterns without a wristband.

The device, called Halo Rise, will use no-contact sensors and artificial intelligence to measure a user's movement and breathing patterns, allowing the device to track sleep stages during the night, the Seattle-based company said. Amazon said the device "does not include cameras or microphones," and will go for $139.99.

The Halo Rise would be the latest device in Amazon's Halo line, which includes a fitness tracker that can track physical activity and sleeping patterns. Amazon noted the device can connect with its virtual assistant, Alexa, and allow users to wake up to their favorite songs, and a light that "simulates the colors and gradual brightening of a sunrise."