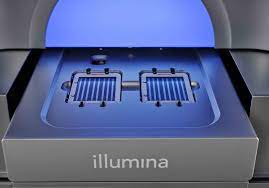 The human genome is made of more than 6 billion letters, and each person has a unique configuration of As, Cs, Gs, and Ts—the molecular building blocks that make up DNA. Determining the sequence of all those letters used to take vast amounts of money, time, and effort. The Human Genome Project took 13 years and thousands of researchers. The final cost: $2.7 billion.

That 1990 project kicked off the age of genomics, helping scientists unravel genetic drivers of cancer and many inherited diseases while spurring the development of at-home DNA tests, among many other advances. Next, researchers started sequencing more genomes: from animals, plants, bacteria, and viruses. Ten years ago, it cost about $10,000 for researchers to sequence a human genome. A few years ago, that fell to $1,000. Today, it's about $600.

Now, sequencing is about to get even cheaper. At an industry event in San Diego today, genomics behemoth Illumina unveiled what it calls its fastest, most cost-efficient sequencing machines yet, the NovaSeq X series. The company, which controls around 80 percent of the DNA sequencing market globally, believes its new technology will slash the cost to just $200 per human genome while providing a readout at twice the speed. Francis deSouza, Illumina's CEO, says the more powerful model will be able to sequence 20,000 genomes per year; its current machines can do about 7,500. Illumina will start selling the new machines today and ship them next year.